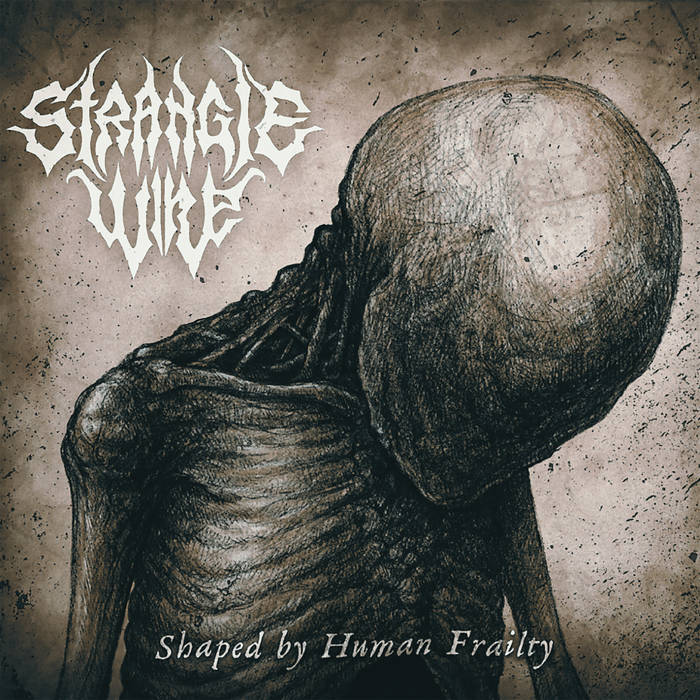 ‘Shaped by Human Frailty’ is the debut album from Belfast’s Death Metal tyrants Strangle Wire, and the despondent husk that adorns the cover art belies the powerful surging electrical current of high intensity that is contained within. Strangle Wire effortlessly combine Old School Death Metal influences with sharp, modern sounding production, with the end result a mixture of crippling Death Metal fury that will punch you in the face and grab you by the balls, forcing you to endure, and a textured, manicured slice of precise musical excellence that highlights each band members individual quirks and expertise as well as their collectively shared spirit and prowess in terms of both song-writing and musicianship.

To give examples, ‘The Human Tensile Experiment‘ lets the harrowing and ferocious growling of the vocalist to flourish and soar to new levels of viciousness, whilst the album title track ‘Shaped by Human Frailty‘ not only demonstrates the sheer crushing brutality of the drums, but also the technical wizardry behind the guitars through intricate solos and sweeping, dark atmospheric guitar leads. As for the bass play, every song benefits from the sturdy uncompromising bass rumble in the background, even the short melodic interlude that is ‘An Abhorrent Intervention‘.

‘Shaped by Human Frailty’ is as thought provoking and engaging album as you’ll hear all year. Superbly crafted performed to perfection. (Marksson)