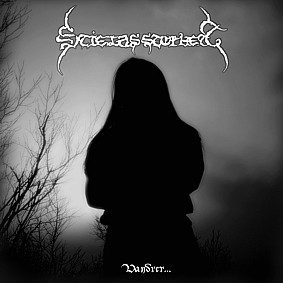 Near-ten-minute opus ‘Der letzte November’ starts off all sharp and raw in the best tradition of authentic underground black metal – and what else would we expect from an entity that boldly includes reworkings of both Darkthrone and Burzum on its debut emission? From the off, Stielas Storhett’s one-man visionary Damien T.G. administers nothing but the shrillest, grimmest blackness known to man, all kept afloat by a strong melodic undercurrent acutely reminiscent of Stefan Kozak’s ethereal work with Mystic Forest and Eikenskaden.

Watery acoustics weave through sparse atmospherics and piercing reverberations. It’s all rather noisy and deliberately unpalatable, with production about as crisp as a drunken eel entering a drowned person’s most private crevices. As unlikely, too, I might add. In keeping with the litany of unusual passages and unique brushstrokes that permeate an eclectic release, the title track contains unexpected mad soaring leads. Indeed, a strange-sounding guitar tone bubbles over the opening tune too, but there’s also loads of fizz peppering proceedings.

Though mostly medium-paced and harmonious, ‘Vandrer…’ displays more than a modicum of stomp, meticulously laced through the fabric of an hour’s dementia. The metal grates like torture by surgical tools and the steely precision becomes increasingly evident upon repeated listening. Offerings remain high and sometimes barely distinguishable, resulting in a lot of ear-slapping and squinting on the listener’s behalf. ‘What is wrong with me?’ you might mumble under your breath…

Rarely have I encountered such a potent welding of melody and grimness amid a fizzing, swirling six-string maelstrom. The freezing dark art is delivered in the best possible taste (rawness is never ridiculously inaudible; melody never gay). The sound of wild, unrestrained female orgasm (oohh yesss….!!!) as showcased on ‘Nymĺne’ does it for me every time. Could it be any more feral?

Fittingly, Stielas Storhett’s take on Burzum’s ‘Erblicket die Töchter des Firmaments’ contains the most ferocious vocals on the album as well as the most competent overall execution imaginable. While I’m no keen advocate of covers, this is awesome stuff – a powerful, fierce and emotive tribute to the scene that this upstanding Russian newcomer now graces with thorough ease and devilish accomplishment.

Just when you believe it couldn’t possibly get any better, closing anthem ‘Dieses Eis wird niemals schmelzen’ ranks comfortably alongside the coldest, nastiest pieces of primal, suicidal majesty ever committed to plastic. Pure quality, this. (GeraldR)