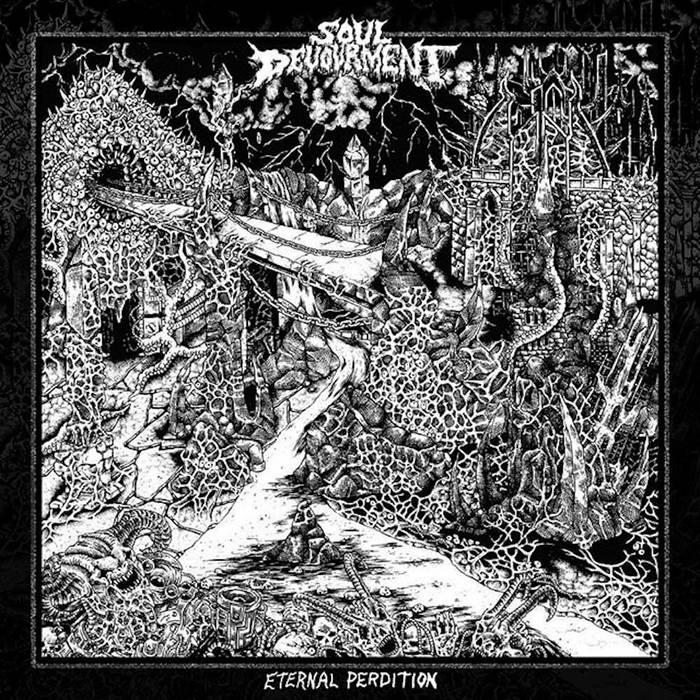 Even though Soul Devourment is based in Los Angeles, the  Death Metal eruption they’ve created on their debut EP “Eternal Perdition” sounds as European as the engine of my Volkswagen. This five track EP combines the best of two legendary scenes, the Swedish crunchiness, born thirty years ago in the infamous Sunlight Studio and the bleak Coventry sound projected by Bolt Thrower. If Bolt Thrower and Entombed – after a short and violent romance – would mate, then Soul Devourment would be their unwanted, ugly bastard child. A big salute to Sewer Rot Records for signing these devourers up.

Opening track “Purifying the Kadingir Sanctum” is vintage Bolt Thrower yet Soul Devourment casted this one into a granite Entombed coating. “Spine rip Fatality” throws you face first into a concrete mixer with that thundering mid-paced Death Metal beat. “Intergalactic Tyrant of Death”,a lethal hipshaker, a groovy muthafucka. This one is the prize beast, propulsed by double bass drums this track takes home the prom king just to mutilate the arrogant fart with a 20 inch blunt butchers knife. “Genocidal Warlord of the Waste” fires away like a horny bull, overcharged with semen but nowhere to shoot his load into. Last track on the playlist “Sign of Evil” is like the odd man out. Slow, filled with atmosphere, bluesy, it lets you retake your breath before hitting that repeat button (again).

I guess that there’s no need for me to emphasize how impressed I am by this debut. These four gents deliver high standard quality for sure. Production, handled at Death Haus Studios is top notch. Crisp and crusty, heavy and clear, even when the band reaches hyper speed or creates a groove as massive as my grandma’s ostomy bag, the sound never gets messy, each detail pops out of your speaker like Janet Jacksons nipples on a random Superbowl.