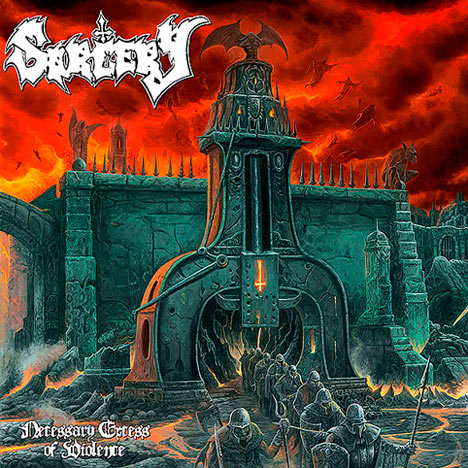 Formed 33 years ago, Sorcery are without doubt one of the oldest Swedish extreme metal acts. The band was active for 11 years and then suddenly disbanded for 12 years until 2009 they reanimated from the dead. Their debut „Bloodchilling Tales“ from 1991 is considered a classic in Swedish Death Metal with its groovy, Thrash laden Death Metal. It took them another 4 years to release the comeback album „Arrival at Six“, a good record which I still listen to occasionally. In 2016 „Garden of Bones“ showed the band in a good shape, delivering solid classic Swedish Death Metal without gimmicks.

Now in 2019 album nr. 4 is here to thrash heads. „Necessary Excess of Violence“ is a well-chosen title and brings the sound of the band to the point. In your face Death Metal…morbid, gory and melodic (yes, it has it`s catchy moments, no doubt). Tomas Skogsberg produced this little thing which should appeal to all old schoolers out there. What does them set apart from others Swe-death acts? Songwriting skills. You can truly hear that veterans are at work here. They know when to accelerate, slow down or change things to keep the song moving and interesting. Sure, nothing new in terms of ingredients for future Death Metal acts but pure, honest and well written Death Metal with a sick, morbid tone that only the best can provide.

After the first half of the record I thought “nice, this is solid“ and then the second half burned my ears. It became constantly better. How many records do you know which have the strongest songs in the second half?

This excess of violence was truly necessary, haha. Fans of Dismember and Entombed should grab this immediately (those leads and melodies aaarrrgghh..) Check it out If you like Svensk Döds Metall. Highlight! Death is coming… (DPF)