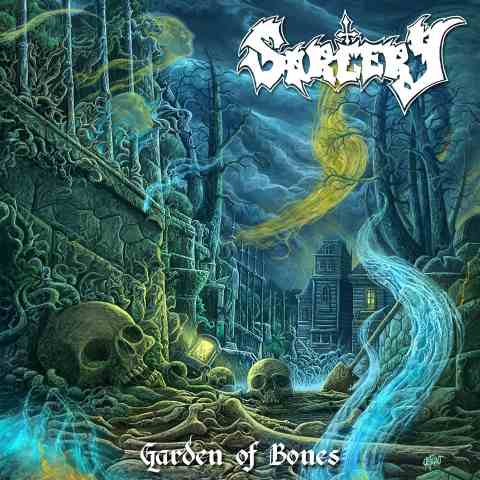 Sorcery is an old band, one of those old-school Swedish death metal bands that started their career by the late 80’s, when that particular scene exploded back in the days. Formed in late 1985 under the name Acid Queen, they changed their name to Sorcery in 1986 after Patrik L. Johansson and Fredik Nygren joined Ola Malmström, Magnus Karlsson-Mård and Paul Johansson. The band recorded three legendary demos and one EP before releasing their first full length in 1991 (“Bloodchilling Tales”). Their 1992 demo seemed, for a long time, to be the one to be written on the history books as their last recording ever (it was never officially released). Their last sign of life was a sampler track “Inhabitants” on a “Voices Of Death” CD-sampler of VOD Records in 1996 and the band officially split up in 1997. Fast forward to 2009: a new demo surfaced (“Master of the Chains”), followed by another one in 2012 (“Warbringer”) and we all had, finally, the official return of Sorcery to spread their trademark death metal upon us. 2013 was the year when the band released their second full length (“Arrival at Six”) and their third one saw the light of day in May 2016, under the Spanish Xtreem Music label. The band is currently formed by the two only original members Paul Johansson and Ola Malmström (guitars and vocals, respectively) and Jacob Wiberg (bass, since 2013), Emil Berglin (drums, since 2014) and Johan Wickholm (lead guitars, since 2015). “Garden of Bones” is another example of how great the sound of Sorcery is. A little over 51 minutes spread over 10 tracks of perfectly executed Swedish death metal, with their own trademark elements, making this record instantly recognizable as another high quality Sorcery release. For fans of the Swedish death metal sound and bands like Dismember, Grave, early Entombed, Autopsy and Entrails. (Antonio)