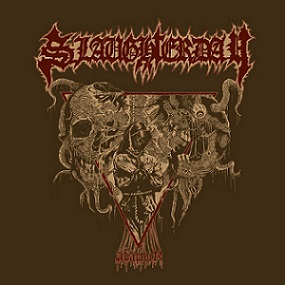 Slaughterday made their name in the underground with their discography and most for their album “Laws of the Occult“. They`re back with a new EP called “Abattoir“ (Slaughterhouse), a perfect title for this band as it seems. The 6 tracks bring it to a length of 30 minutes, with 2 tracks being covers of Amorphis and Trouble. So, Swedish Death Metal with an amount of Autopsy and a sense for great occasional melodies. The singer sounds like a mixture of LG Petrov (Entombed) and Piotr Wiwczarek (Vader) with the ugliness of Chris Reifert (Autopsy). The leads are well placed, transporting the feeling of old Swe-death and of course, Autopsy. The 2 covers are perfectly made, they could be easily have been written by the band themselves. What Slaughterday do best in my opinion, are the slower sections which is the incorporation of eerie melodies and extremely dark vibe into their sound. The speed eruptions after the doomy gloomy horror sounds are top notch and, yes you guessed it, could be from Autopsy. Killer! And those choruses are like old Death. I imagine the pit going nuts. Great EP, and another reason to love that old sounding Swedish like Death Metal. (DPF)