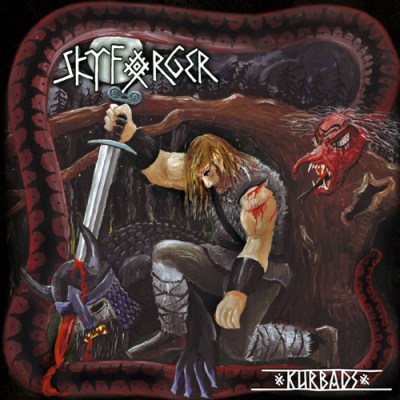 Skyforger have finally ‘hit the big time’ some would say. Relatively recently they appeared on a BBC documentary about Latvian Folk music and more importantly, signed to major players Metal Blade which set a lot of tongues wagging over what direction their new album would take. Metal Blade have an inconsistent roster of fantastic bands coupled with a lot of turgid, commercial metalcore. So has this affected their sound as some predicted, have they toned down their sound in conjunction with a larger label supporting them now? In short, the answer is yes.

I will readily admit, first I detested ‘Kurbads’ completely, it just wouldn’t sit right with me. Maybe it was just I was really yearning for ‘Thunderforge’ or ‘Latvian Riflemen’, for this album is a lot different to their early material. After a bit of time, the album has grown a touch, but something still doesn’t click.

The Black Metal influence has all but disappeared on this album and in it’s place are rather mediocre thrash riffs and a stronger general atmosphere of traditional heavy metal than anywhere before. ‘Curse of the Witch’ opens the album, and I had to take a double take initially whether I was listening to Skyforger or infact Lamb of God. The guitar has been down-tuned from before, and the main riff which forms the backbone to the song has a strong whiff of 90’s groove off it, and is incredibly flat and dull. The whole song to be honest is just flat out boring. The vocals have no real power in their delivery, and lack the character of their earlier material. Luckily, the whole album isn’t this terrible and uninspiring though, as ‘Son of the Mare’, the second track proves to us. Starting out with the traditional Skyforger flutes, with bagpipes strewn throughout the song. This song is much more like the old Skyforger, but still the guitar playing is remarkably average and the man riff to the song at the beginning is so simple and drab, but eventually things get faster towards the end with a traditional duel between flute and bagpipe and the guitar picks up a bit and is fairly diverse for once. ‘The Nine Headed’ basically follows on with this formula. Getting this far it is hard not to remark upon how much slower the album is compared to their other efforts. Rather than being Black/Folk metal as was their sound before, ‘Kurbads’ is essentially a slow thrash album with folk influences here and there. The whistles and bagpipes help avoid complete mediocrity, some songs they are used to great effect, such as ‘Bewitched Forest’, and in some it sounds if they’ve been merely tacked in at the last minute, almost as if to try and remind people of their roots. The vocals stand out a little more in the mix this time as well, they aren’t really any different from before, except Peter does use some questionable techniques where it ends up sounding rather comical, and the lower death growls which are sometimes heard are pretty weak. These don’t appear too often thankfully. As the album gets pretty good towards the middle, it drops off again towards the end unfortunately. Songs like ‘Black Rider’ and ‘Kurbads’ are just not up to level I have come to expect from Skyforger. The production of the album doesn’t help matters either, it is as if it is too ‘clean’ sounding or sterile. The guitar lacks vibrancy while the vocals are too loud. In all, it is exactly the production I feared.

This is still recognisably Skyforger, there’s no question about that, but I keep getting a sense of them having diluted their sound slightly. The Black Metal has been all but removed while watered down thrash riffs have taken it’s place. The album is extremely heavy, their heaviest to date, but it it just lacking that certain attribute which made Skyforger so unique and revered when they first appeared on the scene. The album is a decent, there are certainly worse out there, but put it against their back catalogue, it is extremely poor. For ‘Kurbads’ just doesn’t cut it when it comes to anything near the majesty of ‘Thunderforge’ or flaying folkish brutality of ‘Latvian Riflemen’.

If you are a fan of folk metal who has never heard Skyforger, and are drawn in by the nearest hint of an Eastern European wind instrument then by all means get ‘Kurbads’. For major Skyforger fans I would suggest a little caution first before heading out to buy this. Is it a good album? Average. Was it worth the seven year wait? Definitely not. (ChrisG)