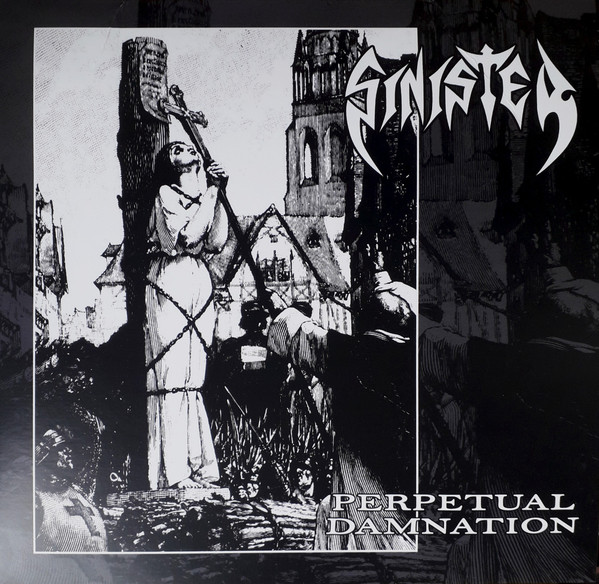 Xtreem Music has launched a new series of old recordings by (semi) legendary Death Metal bands on 10” vinyl records. The list of announced bands to appear in this series is rather extensive and promises some great and interesting records, like the ones from Incantation, Mortician, Malevolent Creation, Master, Macabre End, Sorcery, Terrorizer, Vital Remains, Purtenance and Wombbath for instance. The first one to appear in this series is Sinister’s first demo “Perpetual Damnation”.

Though all four tracks (spread over two sides of the vinyl) have been re-recorded for the “Cross the Styx”-album not long after the initial release of this demo tape, they certainly deserve this little homage to those demo-tape days long gone.

The significance of these recordings for the Death Metal scene in general, but the Dutch extreme metal scene in particular, is not to be underestimated. These early recordings were heavily circulating in the tape trading scene and at this point in their career Sinister played many (small) Dutch stages for extremely wild audiences. Without disregarding the legacy of the first album(s), these demo-recordings sound really raw and full of energy. Like many of these early recordings from the late 80’s and early 90’s, it is that rawness and that certain murky and muddy sound that gives that underground charm. This infectious energy makes you go dive into that old box full of tapes that you have stored at your attic or basement.

Like all the others in this series, this 10” is released in 300 copies (100 copies in each variant of vinyl colour) and comes with an inlay with the usual collage of old flyers and pictures. The package is well done (not too special, though) and compliments the underground intentions. Looking forward to the next releases in this series and thanks to Xtreem Music for keeping this spirit alive. (FelixS)