Shrine of the Serpent – Entropic Disillusion 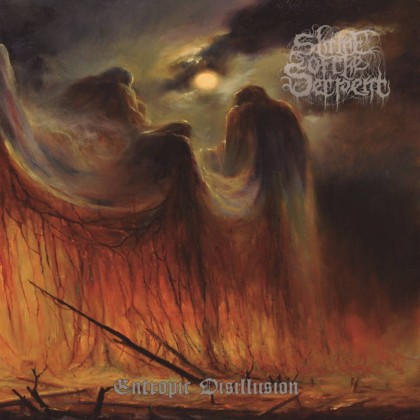 From Portland, Oregon, Shrine of the Serpent deliver sludgy Death Doom with a massive wall of sound on their debut album called “Entropic Disillusion”. This line-up features members from Aldebaran, Anon Remora and Eosphoros and the art for the release was provided by Mariusz Lewandowski & Vladimir Chebakov. Recommend to check those artists out. The first track is instrumental of heavy proportions and leads the way for the things to come, like the second track which begins with a clean guitar for more than two and a half minutes before titans collapse. As mentioned, the sound is loud, fat, the guitars downturned, the vocals guttural, the bass rumbling and the drums hitting hard. All in a slow pace…slower than a Panzerbrigade. The slower, more dissonant parts remind me of Desolate Shrine in their slower sections, and the more melodic, twin harmonies of the Hooded Menace library, which are well picked and incorporated in their sludge sound. It sure bears some Conan heavyweight moments, not as dirty and monotonous as them, but in that direction. Some occasional accelerations help the album not being lost in slow waters and being drowned into boredomeness. A solid album which lacks a bit of remarkable parts to be on top of the podium, but more than good for a first album. Let`s see what they can bring up next. (DPF)