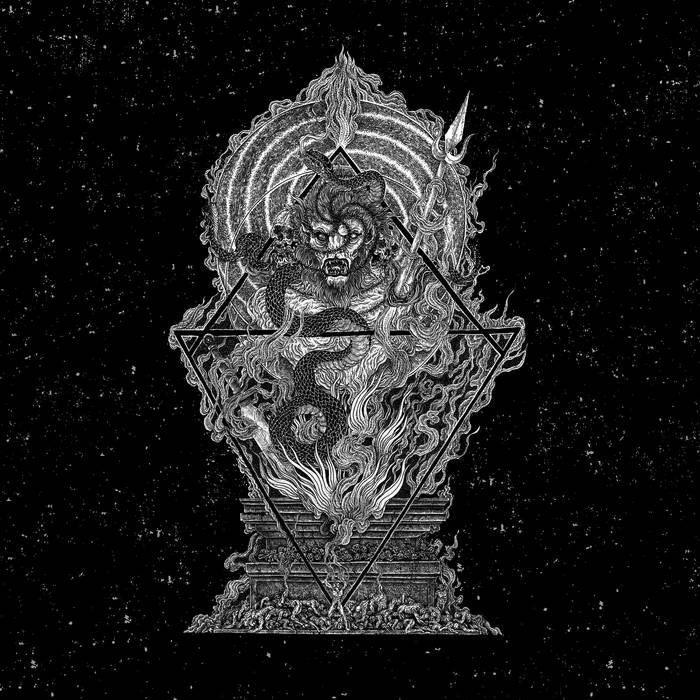 4 way splits are nothing new to be honest, but in some cases the combination of artists on them actually transcends the point of the release being a mere album. It becomes something more and in this case I immediately thought of the Four Horsemen of the Apocalypse – Conquest, War, Famine and Death. Two bands from Sri Lanka, the land engaged in a civil war since the early 80’s (the civil war ended a decade ago, yet the consequences are more than visible today), and two bands from New Zealand (several young Europeans consider New Zealand to be the promised land, since other countries which have been popular for young people to move to generations ago are battling their own political decisions from years ago) together to show us how to put together a sick sounding, mind fucking split, where not only the music, but also the message itself is heavy enough to break bones.

Serpent Athirst kick off the 4 – way split with their black metal attack and just like their name suggests, they are here to eradicate trends. They play a violent form of Black Metal with a pinch of Death Metal and mix everything up with some dark melodies. Less than a minute in, the pace of the song speeds up and we get furious guitars, fierce drumming, blast beats, hyperactive bass and absolutely deranged vocals somewhere between black metal screams, manic howling and the last sounds of a man being garrotted to death.

Second attack comes from Genocide Shrines, another Sri Lankan band who take us deeper into the Black / Death Metal realm with their song “All and / Or Nothing” (as the name suggests, it deals with onthology, even more precise, with nothingness). The band caused quite a stir when they first appeared on the scene and they do a magnificent job to keep themselves in the dark spotlights of the underground.  They infuse their take on black metal with a lot of  death metal elements – tremolo picking, blast beats and nefarious growls and gutturals – and add industrial-like guitars and roaring bass to create the beastial Black / Death Metal they became (in)famous for. The slower parts of the song create an annihilating atmosphere, which only emphasize the strength of the attack.

The second half of the split takes us even deeper into the war metal territory, starting with New Zealands Trepanation. While the song has a rather slow start, it quickly speeds up and piles up rather intimidating  combination of the most raw elements of all of the genres they incorporate into their 3 and a half minute attack. Cavernous and beastial growls accompanied with occasional shrieking, grinding guitars and chaotic drumming do exactly as the bands name suggest – they drill a hole in the listeners skull (trepanation was one of the first ritual medical procedures, where drilling a hole in someone’s skull was used to release the pressure in the head). Definitely not for the faint of heart!

The final kick to the head comes from Heresiarch, currently one of the most recognized forces in the war metal part of the underground. The battle to death between two men is described through music itself. It starts slow and skull crushingly heavy and after a bestial growl seconds later speeds up to chaotic combination of vigorous drumming , crushing guitars and pounding bass, all mixed up with deatlhy growls and occasional Black Metal screams. The songs slows down again, but just for a couple of moments, which escalates the destructive atmosphere of the song and literally doubles the chaos the second time it speeds up. Irregularly placed lead guitar attacks imply of lawlessness and when the song slows down the second time, it becomes clear the two men engaged in a battle are actually the opposite sides of every person fighting their own ways which fulfil and at the same time reject their fate. Mind boggling and magnificent at the same time.

Uf, this is a lengthy review of a short release, but honestly it was difficult stringing enough words which would do this release the justice it deserves. This is definitely one of the best splits in a long time and absolutely the best split this year. Delve into it! (Black Mary)