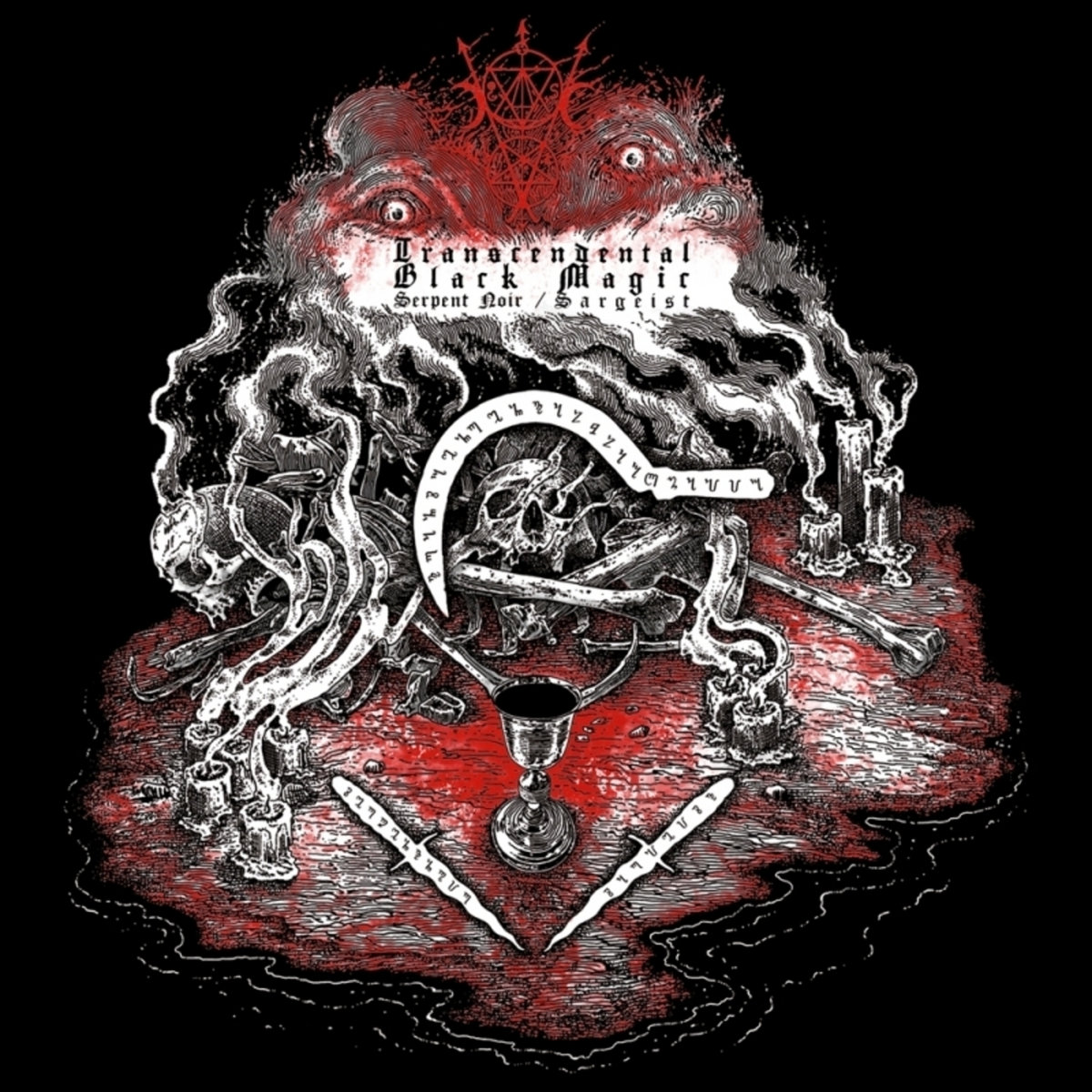 While split releases can be stellar, they often lack a sense of coherence when two bands just do their thing on their respective sides of the split. This is not the case on `Transcendental Black Magic’, which serves us up a collision of the worlds of Hellenic and Finnish Black Metal with the unison of Serpent Noir and Sargeist. `Transcendental Black Magic’ is their unified expression of the great Untold and the great Unseen, The Red Dragon, and sees Serpent Noir vocalist Yiannis K. provide the lyrics, dealing with life changing events on a physical, metaphysical and magical level, for not only Serpent Noir but also Sargeist.

Admittedly, my previous experience with Serpent Noir was limited to their side of the split with Sweden’s Mortuus. But not for the first time, the glaring gaps in my collection become painfully obvious, as repeated listens to the band’s most recent album `Death Clan OD’ impressed me with a fresh mix of typical Greek Black Metal with touches of their Scandinavian (and especially Finnish) scene contemporaries. Their strong sense of (Heavy Metal) melodies and atmosphere are even more pronounced on the four tracks on `Transcendental Black Magic’, perhaps enhanced by a slight change to a clearer yet darker production compared to their previous full length. In particular `Endless Night of Lilith’ is a highlight, and at no point does the band hold back. The vocals are delivered with an intensity of a man pouring his soul out (loving the ugh in `Daemon Behind the Bars’), something that strongly ties both sides of the split together.

‘God of the Darkest Dawn’ kicks off the Sargeist side of the split in an all too familiar fashion, with material that logically follows up some of the best material on my personal favorite `Let the Devil In’ or the excellent `Death Veneration’ mLP. While Sargeist mainly draws inspiration from traditional Black Metal, they’ve never shied away from a catchy melody. On the phenomenal `Spirit Nox Famuli’ the band even flirts with Maiden-esque harmonies towards the end of the track, showing an even more versatile form of the band without losing their trademark sound and ferocity (such as on the more traditional closing track `The Eleventh Claw’). Clearly, Yiannis K.’s devotion to writing the lyrics lit a spark in Infernus, who provides an intensely impressive vocal performance, his best since joining Sargeist.

And in these new slight additions that both bands add to their sound, Serpent Noir and Sargeist not only lyrically but also musically come together. `Transcendental Black Magic’ is a great example of how both sides of a split release form not only two clearly defined parts but also make the sum greater than its parts. What a collaboration! (VincentP)