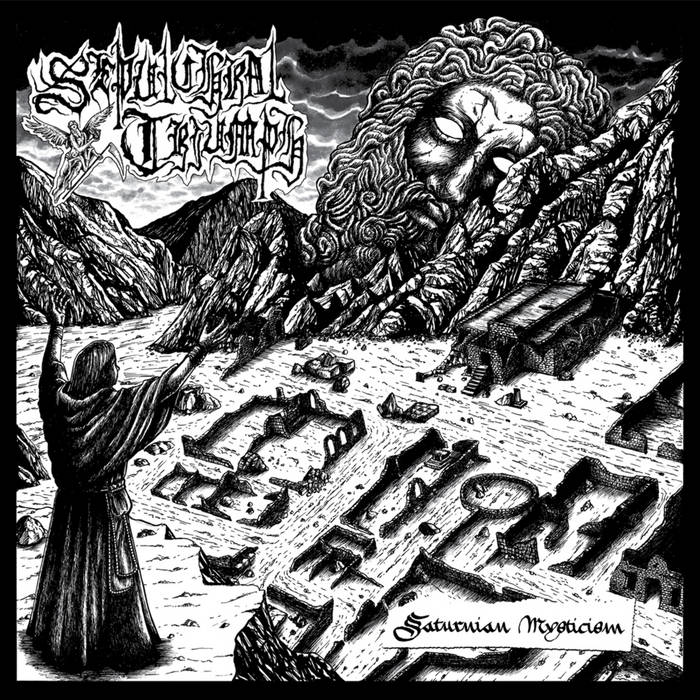 Argentina-based Sepulchral Triumph is ruled by a single soul, someone who calls himself Beulenpest. When you add this to that the enigmatic cover, you know you are dealing with a Black Metal band where the subject matter is in the darkest corner of the human mind. Beulenpest can also be found in his other bands/projects, amongst them are Ages Of Blood and Avstral Forest, and in the past we also saw him in the rapidly rising in name and fame Wampyric Rites. With Sepulchral Triumph he releases this debut album ‘Saturnian Mysticism’, which will see the light of day on vinyl via the His Wounds label.

The album is made up of four long tracks, each with about over 10 minutes of playing time and two shorter interludes of about two minutes each. Long songs offer plenty of room to play with various themes and dynamics or present beautiful and long-drawn-out hypnotic songs. It is therefore striking that neither really happens. Beulenpest performs his Black Metal with verve and uses all the right 90’s underground aesthetics, but it still doesn’t really get off to a good start. The atmospheric organs, the incredibly nice raw-sounding riffs, the haunting leads and the basic yet effective drums: it’s all there. It’s not at all bad either, but it just doesn’t get exciting and the attention soon wanders and before you know it, you’re doing the dishes. Even after several listens, it just doesn’t want to stick and that’s a real pity, because in fact the music has all the right ingredients. It’s a bit like baking a cake and opening the oven too early, then the cake collapses and the result is somewhat disappointing but not necessarily distasteful or inedible… (FelixS)