Sentient Horror – The Crypts Below [EP] 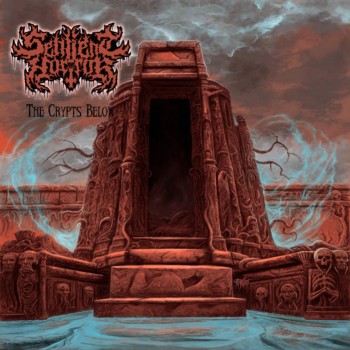 Formed in 2014 as Sentience then re-branding upon the 2016 release of their debut full length, “Ungodly Forms”, Sentient Horror (USA) are relative newcomers from suburban New Jersey who make no secret of their objective: to give tribute to the classic era of Swedish death metal. Within that idiom, their sound lies more on the orthodox side, in the vein of Entombed, Dismember, and Edge of Sanity relative to the more esoteric Swedish bands such as (early) At the Gates, Therion, and Gorement. The guitars are, of course, drenched in the buzzing roar of the HM-2 sound – this should paint a clear picture of what to expect for any new listener to the band, but though they make no attempt to reinvent the wheel, “The Crypts Below” offers a well-executed and entirely competent, though maybe generic, expression of Swedish death metal.

“Crypts Below” starts fast and unapologetically, with the band ripping through a fast series of snarling power chords and murky tremolo picking on top of no-frills, thrashy beats, setting the tone for more or less the rest of the EP (capped off by an excellent cover of Edge of Sanity’s “Darkday”). The overall level of musicianship is adept, with each member accounting themselves well and not coming across as overwhelmed. Of particular note is the virtuosic lead guitar playing of Berklee-trained founder Matt Moliti, armed with technical skill and phrasing well above average for most guitarists attempting this styles. Sometimes these solos take place over doomy, melancholic chord sections (as in “Hatchet Crimes”) or above raging salvos of skank beats and riff-streams. Doubling as vocalist, Moliti’s performance on the microphone is full-throated and powerful, though mostly lingering in a low-mid range without much textural experimentation. Electric bass and drums are performed in a largely traditional style, often mirroring the guitar in the case of bass, and drums keeping time with added flourishes of quick tom rolls or double bass when appropriate, providing a solid rhythmic bed over which the guitars race and transition.

The songwriting largely treats the riff as an end in and of itself, communicating itself through staples of the style – muscular D-beat rhythms, sustained chords, speeding tremolo riffs and more articulate single-picked phrases. These build tension and then release it as they should, but often come across as somewhat predictable. Melodies are generally developed as a linear stream with few verse/chorus sections, but ultimately seem mostly circular in their direction. Fans seeking respite from the dark aggression of the band may find solace in the occasional use of more consonant, “noble” harmonies that perhaps bring to mind the more heavy metal rooted era of Carcass amidst the webs of classic Swedish riffing.

Overall, those familiar with this style likely won’t find much idiosyncrasy to set this band apart beyond their technical ability. The four original songs, while logically arranged, show minimal diversity rhythmically or melodically, and there’s little sense of sonic progression from beginning to end of the EP, and it ends in much the same way as it starts. While there are some fans who want nothing but that, those seeking the odder side of death metal probably won’t feel particularly compelled by this release. Nonetheless, this EP has a very solid production, and is tight and generally well-composed without overstaying its welcome too much. (SSP)