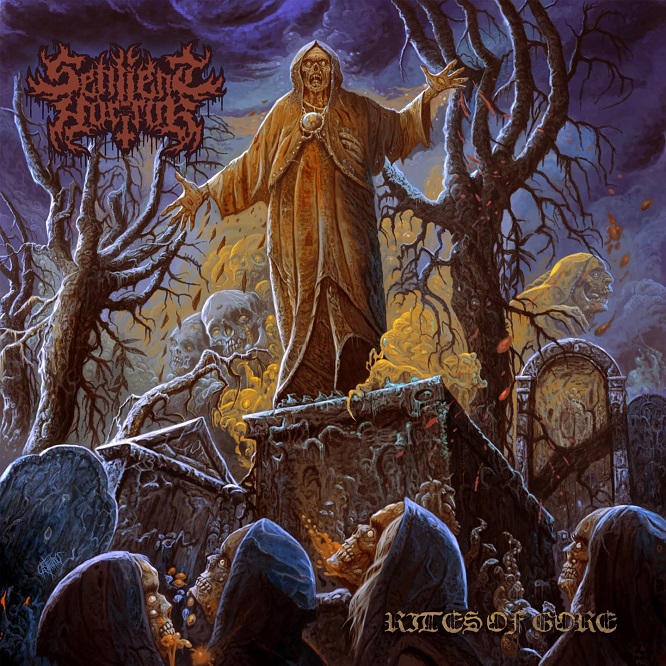 Sentient Horror hasn’t disappointed me with their previous releases, so I was excited to give their new album – “Rites of Gore” – a first listening.

And again, I’m stunned with the level they deliver on this one! Old school Death Metal with balls, brutal as fuck and with riffs that blow everything away! They start off furious with track ‘A Faceless Corpse’ and continue their fast forward attack the entire album. They took the Swedish old school death metal style, and uplifted it with great murderous solo’s and a banger of a voice, a top notch production that puts all instruments in the spotlights, and a big portion of aggression and energy that makes this album an insane one.

Is this an album of originality? Nope, it’s not, cause they took DNA from Entombed, Gorefest, Fleshcrawl, Hypocrisy, Carcass, Skeletal Remains and others to name a few, and created 9 tracks of pure Death Metal. The final and tenth track is and ode to Entombed (the cover ‘Supposed to Rot’), so horns up for this LG Petrov-worship. The buzzsaw sound (praise HM-2 guitar pedals!) takes you back in time, track ‘Splitting Skulls’ is one that will do very well live on stage, cause it sticks immediately in your head,  and ‘The Grave is My Home’ is a magnificent one where more melody is added. Overall seen this album is a must for any old school maniac…so don’t hesitate to give this one a spin and get hooked to it as I am.