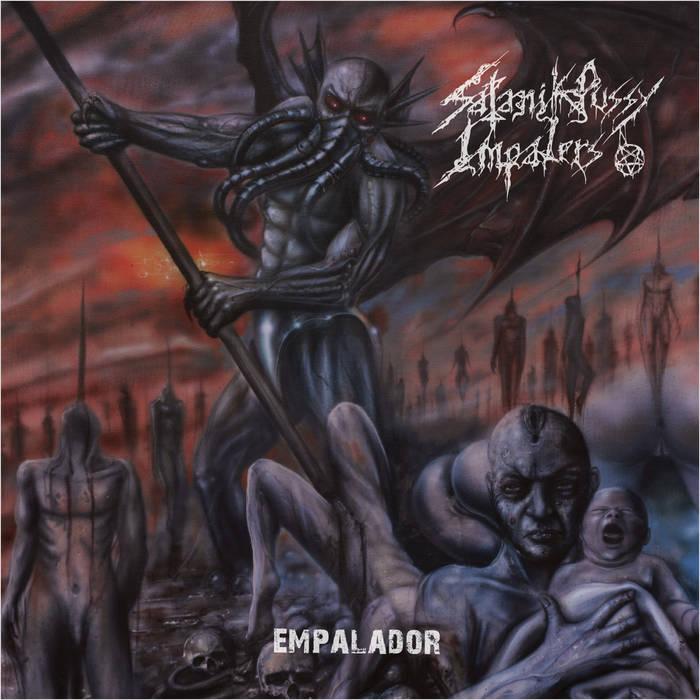 Satanik Pussy Impalers are one of the current and last signees of 2019 on the iconic Tribulacion Productions’ roster in Colombia.

The bandname, its album title and cover don’t predict much good at first glimpse. Musically, this is mega brutal death/grind, somewhat in the Brujera style (first album – without the groove). the label describes it as “Putrid Grinding Death Metal from Manizales – Colombia”. Remind me to take note of the city of Manizales as being a place to avoid at all costs. By the looks of it, these guys learned all there is to know about the Deathgrind genre and even about Goregrind.  However…What we get is heavy grinding Death Metal with a sharp battering snaredrum, as it is usually mandatory in Goregrind. Raw, low tuned and heavily layered grinding guitars, a filthy stomping bass, bludgeoning double bass hammering, topped with horrifying low bellowing terrorist vokills (in Spanish) hit you in the neck like a dull machete.

This album reeks of unhealthy alcohol and gasoline, gun oil, discarded rotting cadavers, venereal diseases, moisty jungle critters that crawl up your boxer shorts and other nasty things I will spare you from.  It also sounds adorable authentic, as if you were catapulted back to 1990. The production is, as is usual the case with the Tribulacion releases, impeccable and well balanced. Forget what I said about Brujera. Satanik Pussy Impalers make them sound as a choir of castrated altar boys. Besides – this album jumps right into a cesspool of Goregrind.

Personally, I find it quite ‘refreshing’ to hear some indecent old fashioned Spanish Gore/Grind/Death carnage without any political correctness and a total absence of good taste, whatsoever. No need to add that this is an album meant to be played loud after a lethal dose of alcoholocausto and lavatory puking.

“Me Gusta El Sexo Barato”? Me, too, cabrones, I guess I might take up your offer about orgias in your beautiful country and …. hrrmmm … (LV)