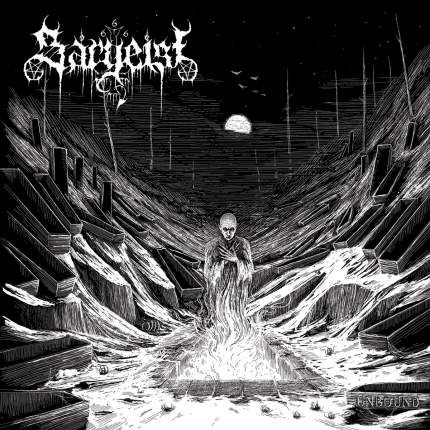 Sargeist’s eagerly awaited fifth album “Unbound” is the culmination of an almost entirely new line-up (only mainman Shatraug remains), now featuring guitarist VJS from Nightbringer, bassist Abysmal from Saturnian Mist, drummer Gruft who has played with bands like Desolate Shrine, Lie in Ruins and Perdition Winds, and vocalist Profundus also from Desolate Shrine.  Considering all these changes it is amazing just how typically ‘Sargeist’ this all sounds, ploughing on mercilessly with the traditional Finnish Filth we have all become accustomed to.

As is standard for Sargeist releases (except for “Feeding the Crawling Shadows” which was average at best), the song writing is absolutely top notch without a single filler to be found throughout the albums entirety. It has the barbarity, the melody, the coldness and a surprising amount of variation that those who tossed one off to albums like “Disciple of the Heinous Path” or the superb “Let the Devil In” will no doubt welcome. Opening with the punishing “Psychosis Incarnate”, the ethos of this album becomes crystal clear in the first few seconds as the blast beats pound, guitars swell and vocals scream their unholy sermons. The production is superb letting all of the aggression, (un)earthiness and sinister melodies creep through with enough clarity to stand out without losing any of their unrelenting potency. The playing is tight and focused making sure to shift the pace in order to keep it all from stagnating, never once compromising its unholy intent or watering anything down to appease the masses.

Although it is a very full-on, chaotic sounding album there is a certain amount of restraint to be found on tracks like “The Bosom of Wisdom and Magic”, “Her Mouth is an Open Grave” and “Wake of the Compassionate”, which is where, I feel, Sargeist really excel on this album. The shifts in pace really do pay dividends in the albums overall impact, holding off from the full attack in all the right places before hammering in the nails with brute force when it needs to. Usually with black metal played in such a traditionalist, one-dimensional fashion it can become a somewhat tiresome and laborious listen, but in the expert hands of seasoned performers like Sargeist the results are nothing short of outstanding. Needless to say, “Unbound” is a must for any discerning black metal fanatic. (DaveW)