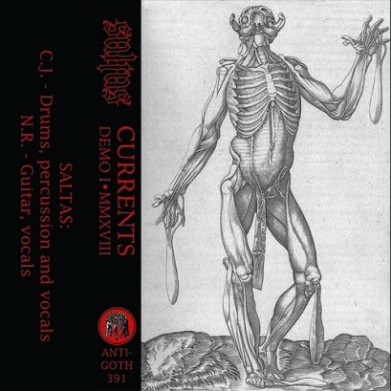 Saltas is a duo from Sweden and “Currents” was their first demo, recorded towards the end of 2017 and was released digitally and on tape (sold out). They followed pretty quick with a second demo, “Parasites”, afterwards which also sold out on tape. This year a compilation cd with those first two demos is released and even a vinyl is planned.

With only guitar, percussion and vocals Saltas brings a primitive form of Doom, Death and Drone. It’s a simple but effective type of music that is pretty atmospheric and dark with slow, heavy and simple riffs. The vocals range from deep death grunts to raspy screams and complete the sick and rotten feel of this demo. It gets a bit repetitive at times but that’s the nature of this kind of music and it’s probably exactly where they wanted it to go. The sound is like their music, unpolished, raw and underground. So underground slow Doom/Death is what you get for 4 songs and 27 minutes.  (MartijnK)