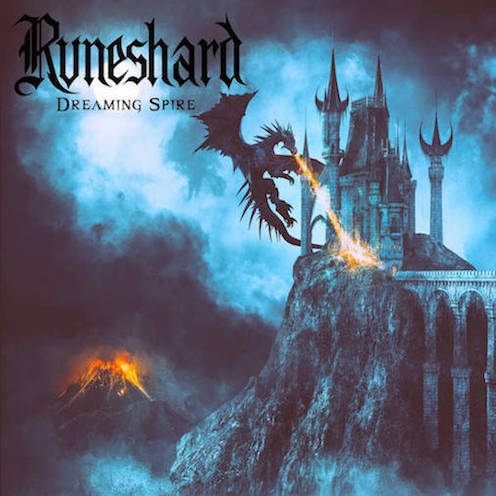 If your eyes shed a tear when hearing the words “Starfire Burning upon the Ice-Veiled Throne of Ultima Thule”, “And Lo, When the Imperium Marches Against Gul-Kothoth, Then Dark Sorceries Shall Enshroud the Citadel of the Obsidian Crown” or “The Dark Liege of Chaos Is Unleashed at the Ensorcelled Shrine of A’zura Kai (The Splendour of a Thousand Swords Gleaming Beneath the Blazon of the Hyperborean Empire: Part II)” you have to take a moment for this new band from Hungary. Runeshard can be considered a simple copycat or a mere thief of the mighty Bal-Sagoth, but as the band from Yorkshire is as unique as a snowflake (the actual snowy one) it is worth mentioning and at least give it a spin or three.

The biggest difference with this one-man project of Bálint Kemény compared with Bal-Sagoth, is the fact that guest-vocalist Alethiuz has less charisma in his voice during the narrations than the mighty Byron, but I do have to say it is almost an impossible task to fill his shoes. When comparing the albums of Bal – Sagoth I think Runeshard is more towards something like “Battle Magic” than “A Black Moon Broods over Lemuria” or “Starfire Burning upon the Ice-Veiled Throne of Ultima Thule” as those albums have a darker edge.

Is it 100% Bal-Sagoth? Well, it sometimes also reminds me of late Ancient Rites with some melody lines. If you miss Bal-Sagoth, just play their albums…but if you’re curious about something new in the same vein, definitely check out this EP. (Ricardo)