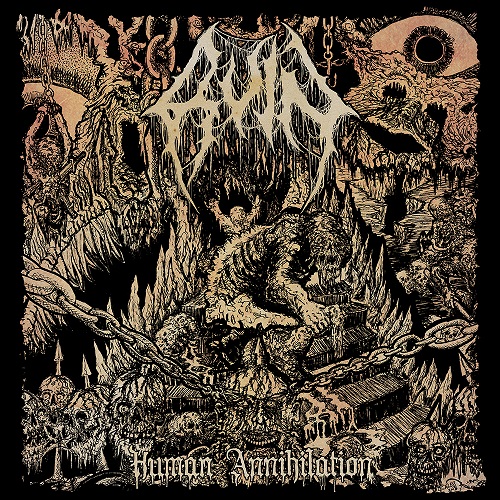 What really strikes me about this album is how the album feels like one big piece of music as opposed to just individual songs. You can certainly enjoy individual tracks as these are very well crafted and disgusting hymns of death BUT the album is so much more than that. Press play and get sucked into a word of gross riffs, whammy bar insanity and some of the best uses of samples and interludes that I have possibly ever heard. Unsettling noises and serial killer samples fill the void in between songs and it feels like you are trapped inside the mind of a murderer.

The music itself is just best described as gross. Covered with a throaty and very unique vocal style, the riffs ooze and churn like a tornado in a sewer. Bodily fluids are flung everywhere and you are coated by the end of the album. Fast Death Metal riffs are common but the band has some of the sludgiest riffs I have ever heard. The whole album like I said is just covered in a layer of filth and there really isn’t any other bands that sound like Ruin. They have found their own sound and is it disgusting. (MikeH)