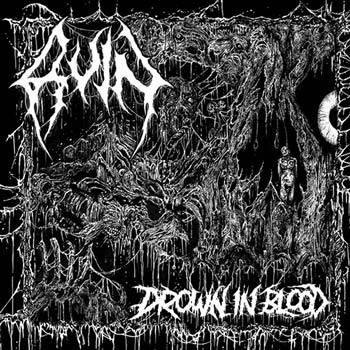 Ruin is an obscure death metal band from Phelan, California (USA) formed back in 1991. They released a demo that same year (“Sickening Ruin”) but, due to various members of the band being incarcerated and institutionalized, the band was disbanded at some point later that year. 2015 saw their return with the release of their second demo “Spread Plague Hell”, followed by three splits spread between 2015 and 2016. A year later, their debut album finally saw the light of day, released by three different labels on CD, tape and later vinyl (respectively, Memento Mori, Von Frost Records and Blood Harvest). The album is as sick as anyone could have predicted, judging by the band’s previous known work and reputation. It’s a collection of eight destructive songs dealing with themes such as death, murder and destruction and whose titles perfectly reflect the overall atmosphere of the album and artwork (“Crawling Through the Vomit”, “Sewer”, “Torture is Heaven”, just to name a few). Whatever happened with the band members in 1991 belongs in the past (and it’s none of our business, anyway). What matters is the present and the fact that this album is a very good one, perfectly fitted for any old-school death metal fan and that should be listened in full. (Antonio)