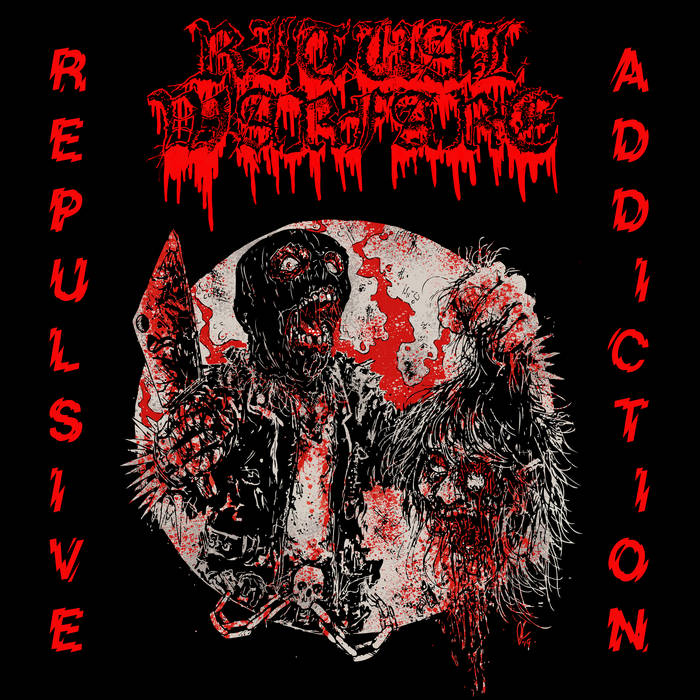 Canada in 2021 alone has been spewing out gems including Altered Dead “Returned To Life”, Sarin “You Can’t Go Back”, and Halifax based Ritual Warfare with their three track EP “Repulsive Addiction”.

Progression is heard this time around compared to their 2019 release “Total World Extermination-Total Fucking Annihilation” which wasn’t well structured or focused in direction.

What grabs your attention initially is the artwork done by Karl Dahmer, who’s also done album covers for Exhumed, Goreified, & Posthumous Regurgitation. Ski masked maniacal killer, holding his victim’s head like a trophy in one hand and a bloody meat cleaver in the other, grizzly yet bold use of solid and splattered crimson detail.

When you hear these three tracks, clocking in under ten minutes, you catch numerous genre influences. IMO you hear the dirty guitar tone similar to Slaughter’s “Strappado” with morsels of crust riffs reminiscent to ENT or Discharge, trade off vocals that range from bellowed barks to brief shrieks, noted on their closing (and my favorite) track “Alcohol and Misery”. They’re a more intensified version of Venom and if Motorhead had a dark, sinister, ungodly presence to their music; It’s what Midnight wishes he could pull off, and a contemporary version of what you could blend Exhorder & Terrorizer, amplifying the hostility in their form that’s disgustingly divine.

Opener “Repulsive Addiction” has a warped audio intro that I’m sure will play some demonic message if played backwards then kicks in with pummeling drums and fast paced action, as if one is reliving their rebel youth in the 80s, wrecking shit and causing havoc. “Blood Fucker”, for being less than a minute still kicks ass and is full of rich anger.

I am pissed that this EP isn’t longer, but can’t wait until these guys come out with more! PLEASE! (Tori Belle)