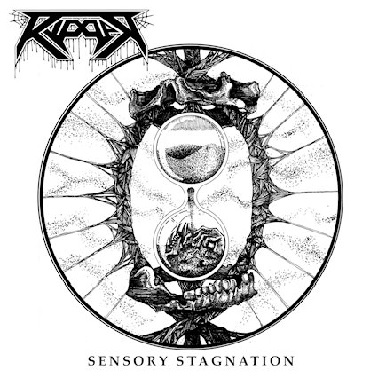 Nowadays the Chilean band that impresses me most in terms of music and the evolution that their music has been facing since their first official release is Ripper, a Death / Thrash band that recently released “Sensory Stagnation”.

This EP is simply amazing because it features a band that has no problems in showing their influences alongside their own face. The sound that Ripper is playing today is no longer just a Thrash metal with a huge Kreator footprint as it has become something beyond mere influences. Obviously the Kreator influence is present still, but the complexity, footprint and musical quality of these guys has gone to very high levels. It’s as if Kreator teamed up with old Canadian Obliveon and Sadus. This really describes the band’s music these days. I would be absurdly unfair if I didn’t mention the band’s bass string monster, bassist Jose Piutrin. I have no doubt that he can be placed among the best bassists of the metal scene today. If you appreciate Steve DiGiorgio’s monumental work…this is the reference I can use. It is invigorating to hear a bass player being a protagonist within a metal band.

“Sensory Stagnation” features five songs, the first one being instrumental. “The Unreal” comes next and is the best song in my opinion as the Death / Thrash technique is the boss here. Big riffs, clear vocal work and the bass devouring the strings. Awesome to say the least. “Sensory Stagnation” is a neck breaking song since its first seconds. The guitars here create really inspiring riffs. “Like a Sacrilege” is a track that brings a big catch of Kreator’s “Terrible Certainty”. More Thrash, but no less accurate. Ending this brutality class comes the fast and brutal “Terror Streets”, which proves that Thrash metal can and should be played with hate.

I would like to see these Chilean hermanos live. I’m sure it must be a very cool event. In the meantime, I can only listen to this album on repeat… and again… once again! (Fabio Brayner)