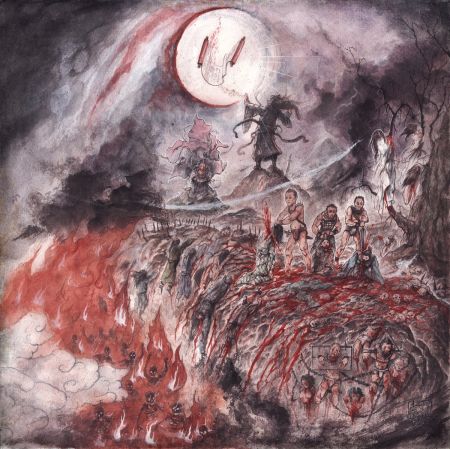 San Jose, California’s Ripped to Shreds, singularly spearheaded by Andrew Lee, have developed quite a stir in the Death Metal underground. Ripped to Shreds have released a full length record, a demo and EP; and have established a crew for live performances, based in Taipei, Taiwan. The widely lauded debut full length, “埋葬 (Mai-Zang)”, was released in March of 2018, and was the nidus for some serious momentum. Siphoning Entombed’s spirit and adopting Bolt Thrower riffs, it cut into Walkman cassette players with buzzsaw efficiency. Subsequently, Ripped to Shreds have sold out of multiple pressings of cassettes, vinyl, CDs and shirts.

Ripped to Shreds seems to be particularly cherished by the ravenous hordes seeking in earnest to transport to a time when white high-top sneakers were gently caressed by the frayed edges of ripped and abused slim-fit jeans. A time of malnourished kids with battle-vests trading tapes and trashed B.C. Rich Ironbird guitars abandoned on the doorsteps of guitar stores when grunge hit. An age of dudes equipped with long hair that was way too poofy and of battling 4 track cassette recorders in the garage. An era of overdubbing drum takes with the only kid in town who owned a drum kit. “God damn it Greg!, take off your fucking Saved by the Bell tank-top and lime-green sunglasses…we’re inside! And stop playing like we’re writing a shitty Counting Crows song! You’re wearing out the tape with all these takes…Have you NEVER heard a blast beat before!?”

Incredibly specific examples aside, I’m not certain exactly how incredulous my expression would be if someone were to describe to me the aural attack of Ripped to Shreds latest EP, Demon Scriptures. However, I am fairly certain my particularly suspicious eyebrow, the right one, would be really fucking high up on my forehead while the rest of my face was scrunched into a quizzical “what the hell are you talking about…..and it smells like shit in here, I’m pretty sure it’s your taste in music” expression.

An EP that possesses blasts of Grindcore, Death-Doom dirges and skilled melodic guitar solos all under the umbrella of classic, early 90’s Swedish Death Metal? It just can’t work. Or, can it? The previous releases generally resembled the usual suspects emulated by any band possessing Boss HM2 pedals and opposing thumbs with which to pin the distortion at the maximum setting and rip the knobs off. It’s almost old hat at this point to even verbalize the obvious forefathers. Yet, here we are. “Enter!….Ye brief list of some top early Swedish bands!”…Nihilist, Carnage, Dismember, Entombed, Grave, Unleashed, Gorement, etcetera, etcetera, ad infinitum.

With “Mai-Zang”, Andrew Lee proved that he has the capacity for composing very competent, high quality Death Metal of the old Swedish variety. The 2019 demo “Eight immortals Feast”, was good, but certainly took a turn towards Deathgrind and may not have delivered the same level of excitement as the previous recording. It left many curious as to where the project might go next. Fortunately, Demon Scriptures seems to be setting a course for future exploration that seems quite promising.

The first and third tracks, “喪家 (In Mourning)” and “株九族 (Nine Familial Exterminations)”, prove to be a continuation of well written and fast paced tracks familiar to fans of prior releases. These tracks pummel their way through with fast and heavy buzzsaw riffs, blasting drums, well thought out tempo changes and expectedly deft leadwork. Rapid hammer-on/pull-off licks and brief thrashy leads are interspersed appropriately, again as predicted.

The head-on collision with Terrorizer’s Grindcore in the conflagrant and blistering “江湖郎中 (Pseudoelixir)” was jarring and fantastic. It took a vicious etude less than a minute to clearly show that there was more to this game than Stockholm mimicry. That being said, the final track, “日月神教第一節 (Sun Moon Holy Cult Part 1)”, is what I feel shows the incredible potential of Ripped to Shreds and may serve as a Harbinger of things to come. The track has it all, slogging dirges to start, transitioning into aggressive attacks, mid-paced control riffs and a spectacular face melting solo. It manages to hold attention for the entirety of its ten minute duration.

Unfortunately, the one nagging issue that I begrudgingly noticed was some sort of compression issue with the snare. It sounded almost as if there were loose coins and water layering the snare. Once I picked up on it I was hard-pressed to ignore it. I was surprised by this given that the illustrious Kevin Paradis did session work on drums and the EP was also mixed and mastered by Horrendous’ Damian Herring at Subterranean Watchtower Studios. Due to the great output by both of them over the years and the fact that everything else sounded great I have to assume the sound was exactly as intended and may simply be a personal distaste I have for that particular snare sound.

Overall, Demon Scriptures is a very well done EP. While I personally prefer “Mai-Zang”, the components to make something truly spectacular in the future are all there and I am very interested in hearing the next full length from Ripped to Shreds. (Chris Topher MC)