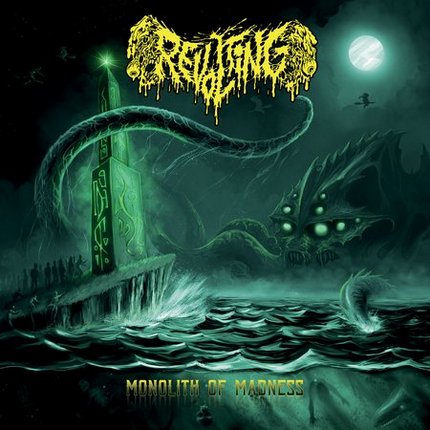 Revolting is back with their sixth full length album ‘Monolith of Madness’. The cd contains 10 new tracks of Old School Death Metal. Revolting isn’t original in their music, and thank god for that. They make Old School Death Metal like it should be played! Once again the beautiful cover artwork is a masterpiece from Italian artist Roberto Toderico. Where  ‘Revolting’ Rogga Johansson gets his time and energy from is a mystery. A quick glance on Encyclopaedia Metallum learns us he is associated with almost 20 different active bands. You gotta give the man credits for just that!  His guitar and vocals combined with the bass of Tobias and the drums of Martin, are a recipe for 36 minutes of great music. Revolting takes you back to those glory days of death metal when bands like Benediction, Dismember, Sinister, Entombed and Bolt Thrower ruled the scene;  this album could have just as easy  been released in 1993. If you liked the debut of Dutch death metal band Graceless in 2017 (“Shadowlands”), then Revolting is a band to check out. Fast drums, thight riffs, trashy melodies, semi-deep grunts and lyrics about death, horror and witchery. Start warming up your neck guys and dolls, because you’re gonna need it.  Favorite song? I’ll go with the slap-in-your-face opener ‘Blood, Blood, Blood’! (Raybeez)