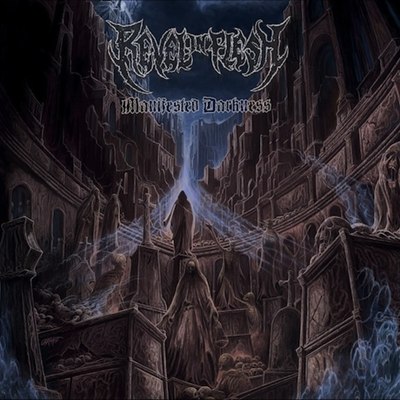 If you chose “Revel in Flesh” as band name and have a matching debut album called “Deathevokation”, you better not play any kind of Emo scream stuff! If you have read any other of my reviews, you probably be surprised when I say that I consider “Deathevokation” as a just above average album despite of the fact it is Swedish Death Metal. Not bad, but the mid-tempo riffs and songs are exchangeable and lack of memorable skilled labor in my opinion. All the ingredients are there, textbook stuff. Still the vocals are more suited for US Death Metal than the Swedish kind. The guttural grunt is a bit too low; I rather expect those typical Kärki or Petrov hoarse growl. I did hope “Manifested Darkness”, released 13 months after the debut, and had some progress in those departments. There are moments of improvement, like the main riff of the title track itself, only those improvements are rare. It all sounds a bit clinical and pale, strengthened by the drumcomputer like patterns. Maybe my expectations are too high, or I have heard too much Swedish Death Metal the last couple of months, but it just misses “something”. At the end, the Old School Death Metal doesn’t match the same quality as the beautiful artwork made by Castellano. Overall the critics on Revel in Flesh are almost beyond positive, if I have to believe other publications. I myself think it’s entertaining, but I’ve heard better concerning song composing the last couple of years. Unfortunately. (Ricardo)