Revel in Flesh – Emissary of All Plagues 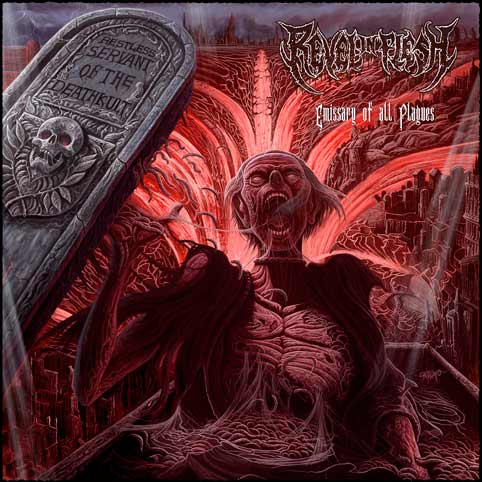 Revel In Flesh, cleverly named after the famous Entombed song (third track of 1990’s classic “Left Hand Path”), is a death metal band from Germany and one of the most productive bands around. Formed in 2011, they already have an extensive (and impressive) collection of releases: four full lengths and eight splits with bands like Revolting, The Dead Goats, Feral, Puteraeon, Zombiefication, Grave Wax, Humiliation and Wombbath. On December 2nd 2016 (along with labelmates Feral), after almost two years of songwritting (and several split recordings), they will unleash their new album on Cyclone Empire with the title “Emissary of All Plagues” (physically available on CD and vinyl). Keeping the high quality level of its predecessor (2014’s amazing “Death Kult Legions”), this new album once again proves that, on this band’s case, quantity is a synonym of quality. Along with the excellent composition skills displayed over the years, it’s also not a coincidence that “grand master of mixing and mastering” Dan Swanö is involved with Revel in Flesh since their very first release, back in 2012. The artwork is again a marvelous piece by Spanish cover artist Juanjo Castellano Rosado, responsible for every single album cover. The album has ten tracks that constantly takes the listener to the Hypocrisy-style territory, one of which a great death metal version of UFO’s “Doctor Doctor”. Just like the work of Peter Tägtgren’s death metal band, this album has a perfect balance between fast and slower tracks. Personally, makes me want to listen to it from start to finish without interruption or getting somewhat bored, just like music should be (albums, not singles… damn you, digital age!) So, don’t hesitate to grab a copy. It’s totally worth the money and it won’t disappoint any fan of their previous work or, if you still are not familiar with the band’s sound, any fan of Hypocrisy, Asphyx, Bolt Thrower and/or Entombed. (Antonio)