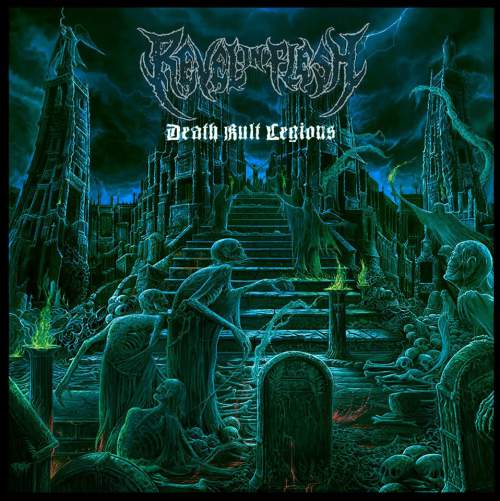 The competitor of Fleshcrawl in the “Best German Old School Swedish Death Metal Band” contest is back with their third album. The formula is the same like the other two albums; playing in the well known Entombed / Dismember style. Still, this album grabs me a lot more than the previous albums, although I considered “Manifested Darkness” an improvement compared with the debut album “Deathevokation”. It certainly was entertaining, but it was a bit too ordinary. “Death Kult Legions” is a real improvement. The drums have less drum computer-patterns and the riffs are more interesting. There are some additional influences which gives this a little twist. For example there is an Asphyx vibe in the beginning of “Frozen Majesty” and you will hear a bit of Bolt Thrower as well. As extra there is a Manilla Road cover (“Necropolis”) which they gave a Death Metal treatment but for me personally “Death Kult Legions”, mastered by Dan Swäno, is definitely a good grooving Old School SweDeath album. (Ricardo)