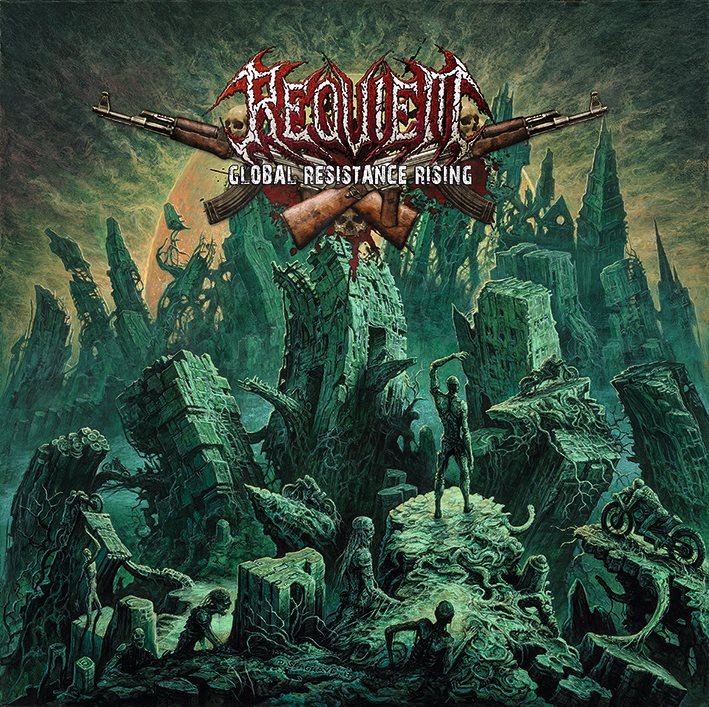 Requiem from Switzerland (yes, there was one too in the early nineties) are one of the better known bands in Death Metal coming out of Switzerland. Their mix of Malevolent Creationism, Suffocationary and Bolt Throwerian  paired with a slight amount of Terrorizer is a perfect combination of heavy, catchy and brutal tunes which doesn’t cease to amaze me. Unfortunately they never received the recognition they deserved compared to other international acts. The album was produced at Iguana Studios (Necrophagist, Punish…) and is top notch as always. Fat and balanced, just perfect for their music. And the cover art was provided once again by master Dan Seagrave. “Global Resistance Rising” marks the first release in 7 years by this war machine and also the return of vocalist Michi Kuster, a deeper version of Brett Hoffman if you want. There were a lot of line-up changes during the recent years which surely resulted in the long period of waiting but it didn`t affect the songs, as you will hear it yourself. They are killer once again, ranging from their more melodic style, more in the beginning of the album, to blast orgies the Malevolent way with catchy choruses, always alternating between the heavy pounding panzer like riffs and the faster artillery war machines. It`s never too technical, nor too simple to bore oneself. A lot of the songs are among the best in their career and carry the flag of Swiss death metal once more. Outstanding performances once more on every instrument. They know their stuff. If you love the bands mentioned above then go and buy yourself this killer piece of death metal. (DPF)