Reactor [CHE] – The Tribunal Above 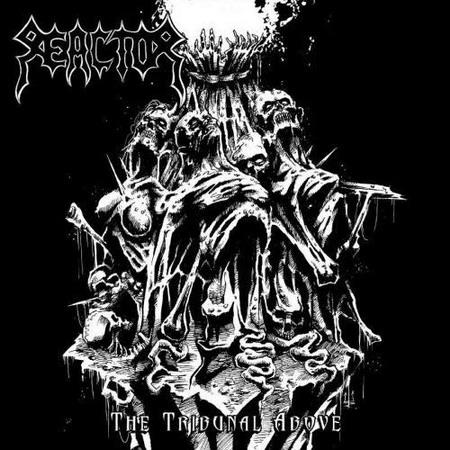 What some people now know as the band Sickening Gore was once their pre-band Reactor. This old school death metal band from Switzerland had one demo ‘The Tribunal Above’ before two of their members pursued their careers with another project. This demo has an incredibly raw unpolished sound, somewhat reminiscent of the first Timeghoul demo (“Tumultuous Travelings”). It’s so raw and gritty that the distortion and resonant effects almost overwhelm the guitar riffs, which gives this release quite a particular sound. This same effect appears on the drums as well. In some cases the volume balance suffers from it a little bit but it doesn’t take anything away from the amazing instrumental work. It’s just very dark and distinct. Most of it is mid-paced, and very groovy. There’s parts with relentless blastbeats and part with slower ‘headbanging’ riffs. The vocalist has an incredible range, from some almost ‘casual’ shouted vocals all the way down to some of the deepest, lowest death metal growls. He mostly uses the second. All of this means that this is not the most ‘listenable’ demo you’ll come across. However, the fact that you need to put some effort into truly digesting it makes it that much more interesting. Your ear gets a better training than when listening to a band that reveals everything at once. Despite these old school death metal characteristics this band doesn’t hesitate to implement some unexpected passages. These are relatively melodic, and almost mesmerizing. The mid-section on the title track takes the listener on a peaceful journey in the middle of a song with a very dark, sinister atmosphere. The keyboards are played in such a way that they almost sound like a singing choir. And ‘Circle of Eternity’ has a very enchanting, but evil keyboard passage. The guitar riffs joining in makes it even better. Unbelievable how this all flows together so well. The artwork is brutal, but not in the usual, overdone way of most cover art these days. The nails grabbing the face on the cover and piercing through one of the eyelids looks absolutely terrifying, in a good way of course. It gives this demo more impact. The cover serves it’s purpose and obviously more gore doesn’t always mean more effect. Overall I’d say this is definitely a release that stands above the average old school death metal. (Jelmer)