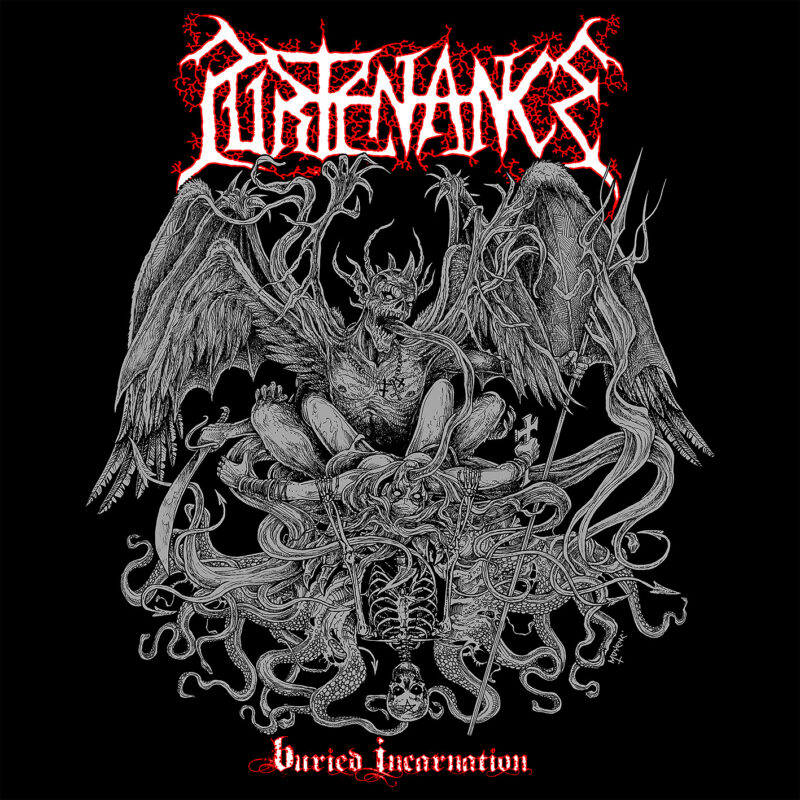 One of the best Death Metal bands from Finland are back with a new album! We are speaking about Purtenance of course. “Buried Incarnation” is their newest record and will be released once again through Xtreem Music.

Purtenance started as Purtenance Avulsion in 1989 and released 2 demos before shortening the name to Purtenance in 1991. In the same year the first EP “Crown Waits The Immortal” was spread and already gained some praise in the scene, just to be topped by their debut “Member of Immortal Damnation” in 1992. Afterwards the band broke up and received cult state until they resuscitated from the dead in 2012 (side note, in 2009 The Crypt released a huge Box Set with tons of material, still one of my favourite releases, thanks to Ted Tringo for the work put into it).

Anyway, from 2012-2017 they released more material than ever (2 EPs/2 Full Lengths) and now 3 years after “Paradox of Existence” they are back with a new line-up and a new record. “Buried Incarnation” has got the obligate Thorncross artwork and the dark, muddy, cavernous production that fits the sound.

The albums starts with a more old school melodic mid-tempo track, “Into The Arctic Gloom”, carried by double bass, a lead riff and the guttural vocals of Aabeg Gautam (killer vocals), a good start. The doomy vibes continue afterwards, focusing clearly on a dark, heavy atmosphere, a very strong point in the history of the band and Death Metal from Finland in general. It crawls, it lurks, it reeks, it seeks…

The lead guitars function like a guide through the songs and the record, always taking an important role. But don’t be afraid, we are not talking about Yngwie, more Gregor Mackintosh.  Old Paradise Lost are sure not a bad comparison here and there, although it sounds still like Purtenance. Slow/Mid-tempo and Up-tempo beats are dominant, mostly on the slower side but speed up at the right moments like in “Inside the Pyre of Enlightenment” or the short blast eruption in “Lifeless Profoundity”. “Dark Womb of Nothingness” has all the ingredients in one song and makes sure you will listen to the entire record for sure. “Burial Secrecy” concludes this journey in the most doomy way.

Purtenance still got it and raise the torch of Death Metal once more! Old school maniacs this is for you! (DPF)