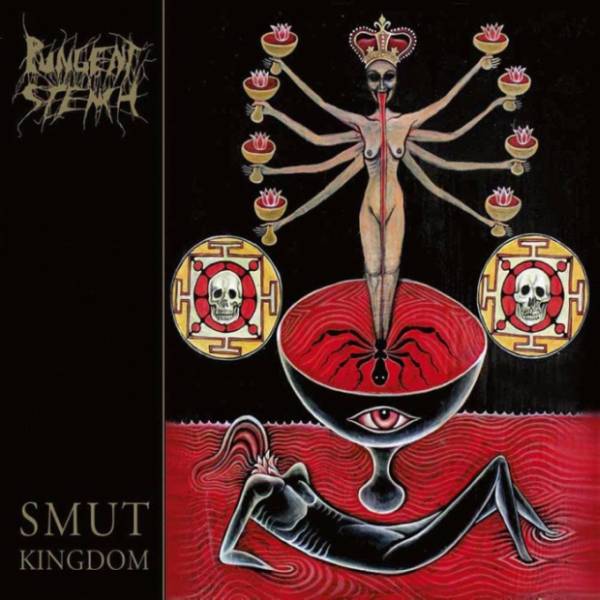 After five studio-albums, which contains some excellent ones as “For God your soul…for me your flesh” and my favorite “Been Caught Buttering”, the plug was pulled in 2007 for Austrian band Pungent Stench. The funny thing about this all is the fact that in that same year this death metal band – who also stepped outside the lines sometimes (especially with album “Club Mondo Bizarre”) – already has created and finished their sixth studio-album titled “Smut Kingdom”. The fans were left behind with a bad taste in their mouth, especially when you’ve followed the twists between both band members Didi Bruckmayr (Cochino) and Alexander Wank (Stench) over the past years. So, believe it or not, but there was an album finished, but they kept it away in a dark closet to die off.

But no panic, cause in 2018 it seems that they’ve got clear in their heads – nope, unfortunately the mess between both guys still stands- and they gave green lights to release this hidden gem. “Smut Kingdom” was finally accessible for the fans and I, personally, was very eager to find out if they’d better left it behind in the dark closet. To answer immediately: NO! Okay, again some experimental moves are audible such as the special opening from track “Brute”, the story about a explosive woman titled “Suicide Bombshell” where the vocals are brought in a more storytelling form and the final track “Planet of the Dead” where we all suppose to be zombies in this world. But I’m sure that I think in the way the old school fans think and remember this bands’ music, so I’m very thankful that they also wrote songs in the old school PS-style!!  Track “Persona Non Grata” is pointy and straight forward and has the first real uptempo change in it, the title track is also a real death ’n roll track which sounds filthy and straight forward, and track “Opus Dei” about Christianity with its great drum parts that sound tight and fat. Other tracks also reveal some specialities, like for example the contagious riffs in “Aztec Holiday” and “Brute”, where the sentence “reincarnation as a predator’  sticks in you mind. But there’s only one true winner on this release that nearly reaches perfection in my opinion: “I Require Death Sentence” where the riffs immediately force you to join and which is executed pretty fast. My favo one on this release for sure. So to conclude: again some experimental parts to discover where this band draws and thinks outside the box, but also some killer tracks that remind me of the genuine Pungent Stench sound. I’m more than satisfied with this release! (Fredde)