Protector – A Shedding of Skin [Re-Release] 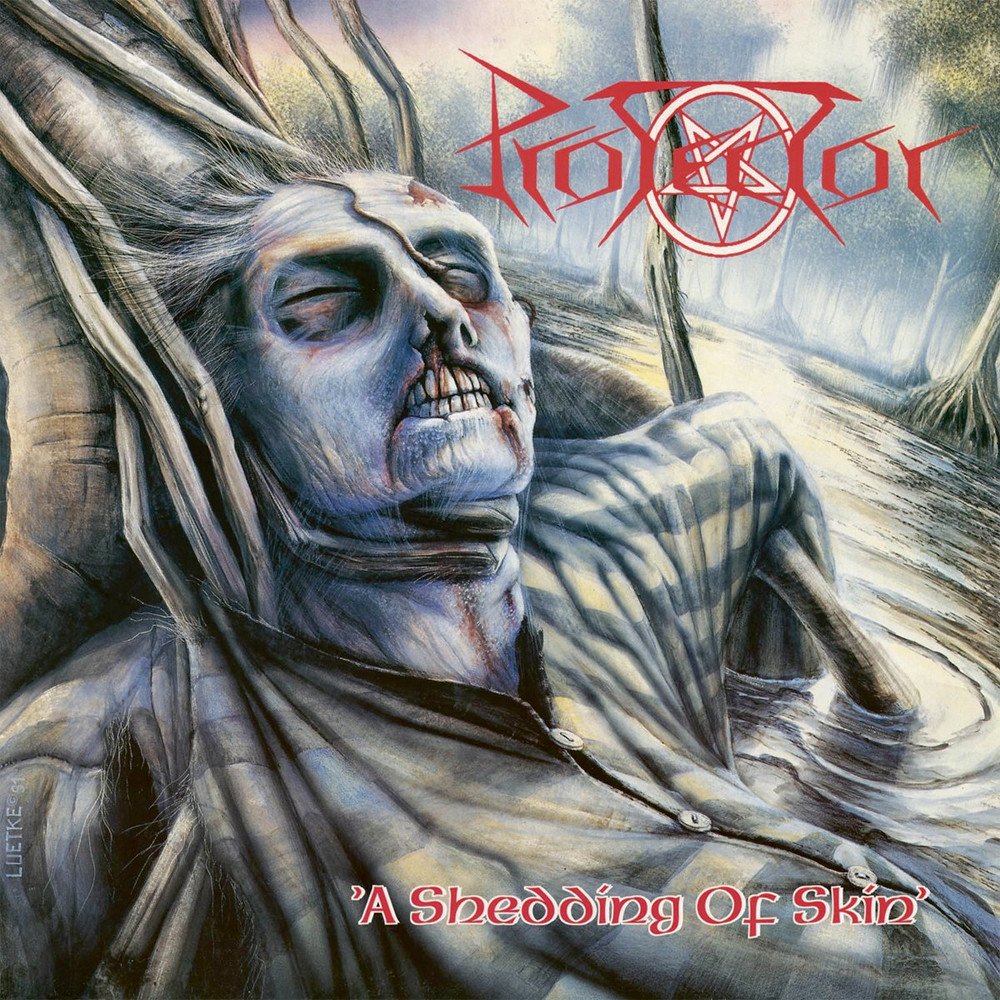 Protector from Wolfsburg, delivered their work of genius with formidable 3rd full length “A Shedding Of Skin” in 1991. Never been on the limelight (possibly for all the rightful reasons), these unapologetic Thrashing Death Metallers, established their marks deeply with now classic demo “Protector of Death” (1986), EP “Misanthropy” (1987), with proceeding to the blunt and brutal to the face debut full length “Golem” (1988) and following up with bewildering “Urm the Mad” during 1989.

After setting the foundations deeply, then right in the era of all things standard, Protector’s savage masterpiece “A Shedding Of Skin “, was recorded during August 1991 at the Musik LAB Studio in Berlin. For this third album, Protector worked together with Harris Johns, one of the most prolific music producers for rock and metal, who also worked for and together with Kreator, Voivod, Tankard and Sodom.

And, the riot combo trio of Olly Wiebel (Vocals, Guitars), Ede Belichmeier (Bass) and Michael Hasse (Drums) (R.I.P. 1994), made sure that, everything went on precisely here with their motifs on: songs, craftsmanship, sound. In addition, the Germans also formulated their style on ‘Shredding’ (rather say, ‘Skin Rapturing’) and structured changes from mid-tempo power to furious mind-bending assault so perfectly and focused, that you have to imagine it something like Attomica, Kreator, Morbid Saint, Massacra and Sadus on crack – which can always whirlwind mind and visions.

Though the band composed the fast and slow parts with their characteristic leaning on thrashy movements, nonetheless their seamless death metal transitions (prost to their magnanimous song writing expertise) leads to a certain uniformity of the song material and with that, 13 tracks here, never get boring, even after many years and countless listens. And, this made the record wholly peppered with sensations; then, the energy level here is so transmittable, that you may see the guys literally emit sparks under right influences.

The utter mercilessness with which the trio chopped down songs like, “A Shedding of Skin”, “Retribution on Darkness”, “Mortuary Nightmare”, “Doomed To Failure”, “Necropolis”, or, enthralling “Death Comes Soon”, vicious “Unleashed Terror” or callous “Towards Destruction”; will remind, there is hardly any music like Protectors ‘s anymore and polished to a high gloss, commercialized, standardized releases of modern sounds, are forever despicable.

Rightfully, this musical rampage is supported by perhaps the best work that legendary producer Harris Johns has ever delivered and one of the meanest cover motifs (Joachim Luetke) of all time. This assuredly establish, even though Protector, never made the so-called breakthrough, but they are undoubtedly among the best, most independent and above all most uncompromising that the scene has ever produced. Suffice to say, why this seminal release is already on 4th pressing (LP) & 2nd pressing (CD), and again, treated with another tempting re-release on High Roller, “A Shedding of Skin” has been especially re-mastered for vinyl by Patrick W. Engel at Temple of Disharmony.

It is certain that, with newfangled refurbishments, both old and new followers will like this release very much, exclusively as this time, it comes with yet another bunch of previously unreleased pictures from the Protector archives. (Rocky)