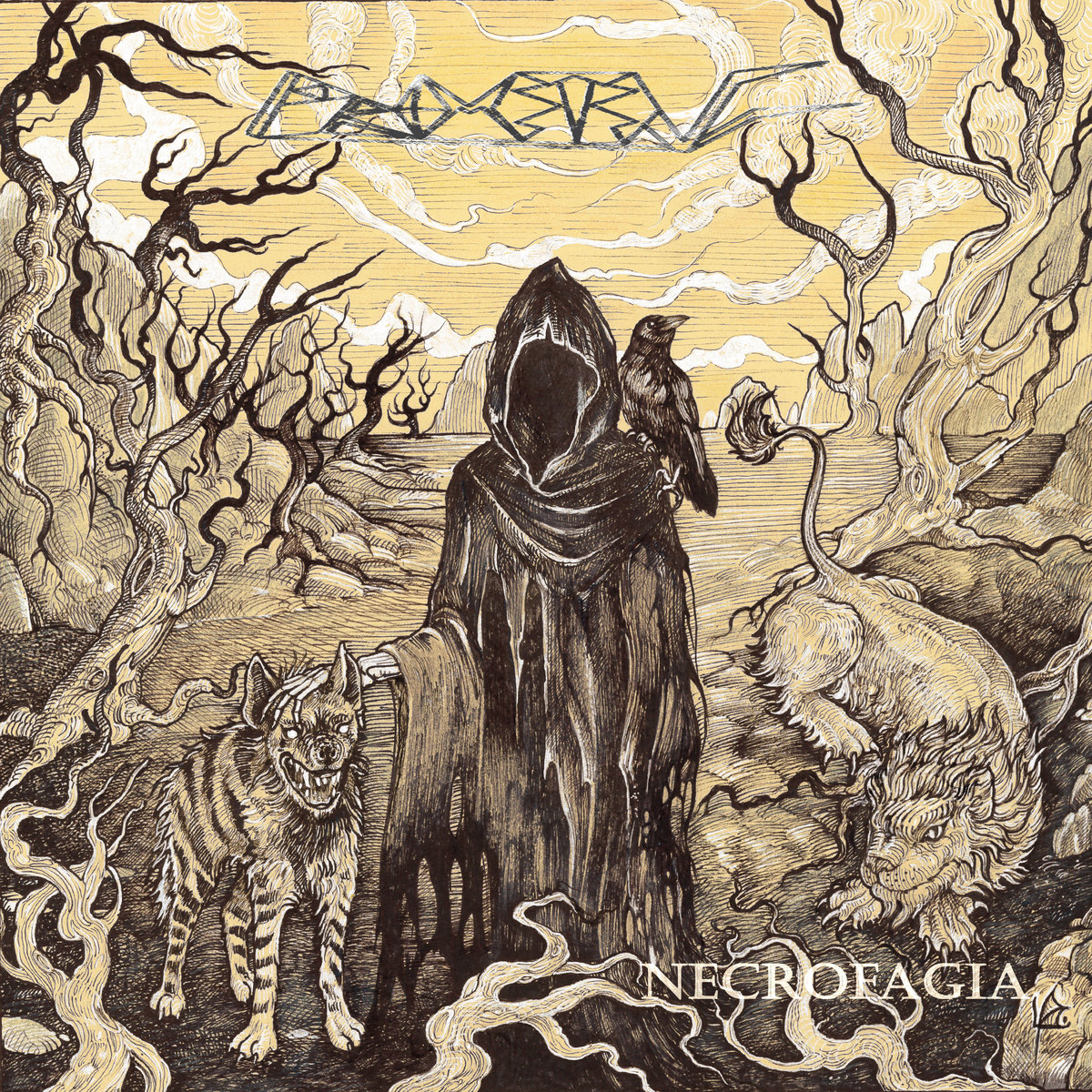 Though originally a two-man endeavor, the Prometeus Bandcamp page tells us that the music of Prometeus is the sole creation of Biagio Rindone (aka Nihilism) since the first demo. For that first demo, “Archimedes”, released in 2008, drums were performed by Giuseppe Napoli, but first “4 Divinitates” from 2019 and now “Necrofagia” this year, were created by Nihilism alone. The project hails from Italy and claims to be inspired by death and nature, which are, of course, closely related in many ways.

One issue I have with one-man projects is the use of obviously mechanical drum machine sounds, more often that not pushed far too high in the mix. I suppose the plan is a wall-of-sound type release, but this approach most often means unlistenable garbage, in this reviewer’s opinion. Fortunately, Nihilism has (mostly) dodged this bullet on “Necrofagia”. I say mostly, as there are certainly stretches of the album where the drumming is clearly mechanical. Thankfully, those stretches (and the whole album really) have the drumming at a very nice spot a bit back in the mix, without it being completely washed out. For much of the album, it is actually hard to tell if the drumming is done live or with machines, so overall, not a huge concern.

Enough about drumming. Nihilism does an excellent job of meshing the rest of the instrumentation, to the point where it doesn’t make sense to write about the instruments separately. Guitars, bass, sometimes keys and horns even, work together to form an atmosphere sometimes embracing, sometimes jarring. There are moments that come across as pretty straightforward Black Metal, leaning to the raw side, and others moments which show a deep dive into the avantgarde. The Bandcamp page claims to be influenced by Progressive Rock as well as Black Metal. This can mostly be heard in textural flourishes, more than in the main structure of the songs. Nonetheless, the influence is present.

I have to admit that this one took a few listens to grow on me. In some ways, it’s a somewhat sparse sound, but that ends up contributing to the bleakness of the atmosphere when it’s all said and done. The journey Prometeus travels through on “Necrofagia” is often subtle, with unexpected pathways. With each listen, I find myself surprised by the musical adventure I encounter. It is rich and varied, though elusive in meaning and destination. I would recommend giving this release some extra time to really let it grab you.  (Hayduke X)