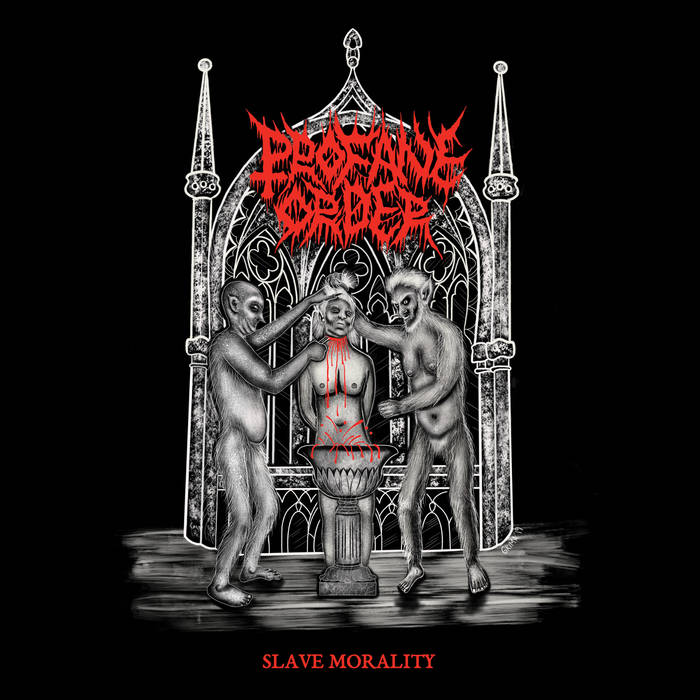 To the individuals who have a penchant for bands like Blasphemy, Morbosidad, and Revenge; Profane Order’s neonatal material is what you are obliged to long for. “Slave Morality” – which is their sophomore full-length and latest output, just couldn’t get more hostile yet meticulous in terms of extremity. These virulently schizoid musical notes will forever brawl into your consciousness if heard once. Because these out-of-control satanic-psychomaniacs from Canada have successfully showcased their bestial virtuoso in a very neat way.

The album begins with a dire preamble filled with eerie screams unified with ghastly noises that leads to eight noxious Black/Death numbers. While giving this release a first spin, each ongoing track will assuredly make you eager to find out the succeeding notes because they are structured in such erratic manner. Needless to say, the vocalist’s gigantic method of up-roaring blasphemous verses completely blends with the densely solid guitar works and heart-stabbing blastbeats of the drums. The demanding usage of reverberation in guitar fills and solos convey that they are directly being delivered from an abyss, and all these vehement combinations make you visualize an everlasting nuclear warfare in the deepest void of hell. Even the unholiness of the heavy composition has not been ameliorated by the crystal-clear production.

Overall, the sacrilegiously crude and coarse composition of every track is enough to ignite the boiling wrath of the profane beast inside of you. The whole spin of this album unquestionably is a wholesome exhilarating experience for the devotees of bestial black/death metal music. So, this barbaric release should be highly praised by all the extreme metal sikkfukks over the world! (Osmani)