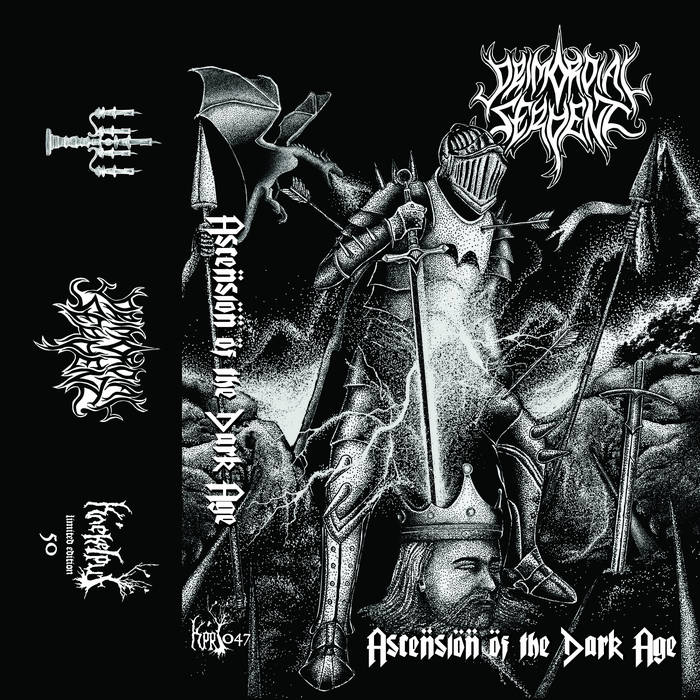 From the frozen, bleak wasteland they call Manitoba, we have Primordial Serpent. Black metal side project of the dungeon synth entity, Kalameet. Geoff Coran is the recording artist for both projects, and he is also one part of Dojo Kobra, a drone/doom metal group. Primordial Serpent is named after two gargantuan dragon-like creatures from the video game series, Dark Souls. A perfect source of influence for this project! Dripping in dark fantasy allure, this album/project is not your run of the mill one-man Black Metal group. Where a lot of Black Metal bands are doubling down with the satanic/evil thing, Primordial Serpent brings a fresh take to the old school Black Metal sound. I love the overall vibe and idea of this project, but let’s breakdown the music.

Ascension of the Dark Age, Primordial Serpent’s debut album, is a clinic in how to do Black Metal proper. The songs are well written and constructed, and the entire album is recorded in way that sound professional, but still a perfect level of rawness. Coran records his material in his own home, but the overall sound and mixing of the album is very well done. I am all for raw and rough recordings, but there are way too many new one-man Black Metal projects who feign rawness, but in fact their recordings just sound like mush. Primordial Serpent is a ray of sunshine in a dark, bloated Black Metal scene. Ascension of the Dark Age provides six tracks of icy cold, malicious Black Metal and one dungeon synth intro track (a must in my opinion). Guitar parts are fantastic! The riffing goes from crunchy, heavy mid-tempo parts to blistering fast sections. Tasteful use of melodies but never too melodic either. The effects and mix of the guitars are really on point for my tastes as well. Bass and drum parts are well done and properly mixed, which is a big difficulty for many one-man bands. Vocals also are shrill, powerful, and blood curdling, a perfect cherry on top of the Black Metal sundae. Another shining star of this project is its lyrical content. I commend any musician who decides to do something different with their band’s concept or lyrical influences. Overall Ascension of the Dark Age is a superb debut for Primordial Serpent. Keep your eyes out for more from Geoff Coran! (Fetid Priest of Pestilence)