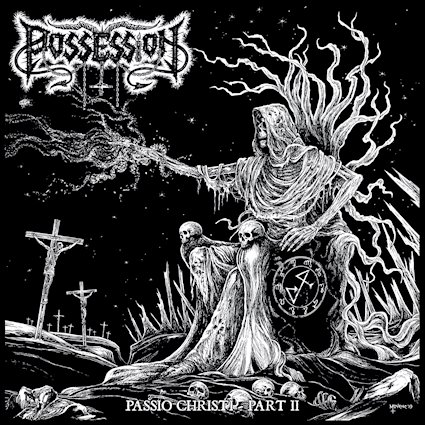 Possession’s second volume of the split (the first volume was released on the same day in association with USBM assault ‘Spite’), “Passio Christi Part II / Necrophagous Abandon” has been unleashed through Iron Bonehead Productions. This time the other half of the record contains aural barbarity from ‘Venefixion’; a French Death Metal quintet whose sonority is very harrowing, toxic and blasphemous. This band’s songs have a powerful vibe of Black Metal’s intensity. ‘Sulfuric Death Metal’ is the term I’d like to label them; their poisonous tunes are deadening and noxious. This band still does not have any full-length under its belt, it would be nice to have some in the future. The split has total six tracks, equal number of songs from both of the bands.

There’s nothing new to comment about Possession’s tracks of this release, they are malignant and unnerving as usual. Usage of psychotic and maniacal guitar works here are too wickedly salacious. This maneuvering Black/Death ATTACK from both of these bands is chaotic and bedeviling, you must crank this record loudly to get the facemelting experience. Such anti-trend and bone-crushing approach of Extreme Metal is what keeps the spirit of underground alive. Possession has never yet released any ‘boring’ or ‘uninteresting’ song in their career, and this split is another killer addition to their furious roaster. (Osmani)