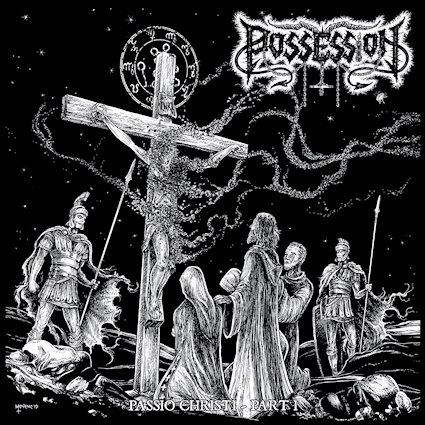 Belgian Black/Death maestro Possession has come up with a couple of lethal splits with two different bands on the same day, and if you ask me how would I describe the sound of these records, three terms would pop-up in my mind: stellar-dark, ominous, and diabolic.

“Passio Christi Part I / (Beyond the) Witch’s Spell” is the first volume of the split which is out via Invictus Productions. It offers five tracks: three from Possession and two from the USBM assault ‘Spite’. This clocks around twenty-six minutes in length and the moment when the post-intro track ‘INRI’ kicks in, you get a sense of what you are about to experience. The groovy riffage and drumbeats of that eight-minute track’s beginning is absolutely on point- evil and grotesque to be more precise. Classic Possession resonance never fails to gratify my audible pleasure, their obnoxious spell always possesses the soul and leads the body to vegetative state. Throughout this split you will undergo all the jaw-dropping stuff Possession usually does, making the songs sublime yet chaotic.

Spite’s part of this release is absolutely killer, abrasively extreme with a bit of Norwegian BM influence. Their part of the split is unhygienic, crude and infernal. Those spiteful rhythms and hellishly alluring melodies generated a spooky layer among the songs and such tight musicianship deserves admiration. If you are not familiar with Spite, I recommend you to stroll through their discography because you won’t be disappointed if you are a devotee of Black/Death.

This blasphemous collaboration from both of these deadly bands is terrifying. Two of the bands have neatly executed their fatal virtuoso but Possession’s part is more obnoxious and ghastlier. (Osmani)