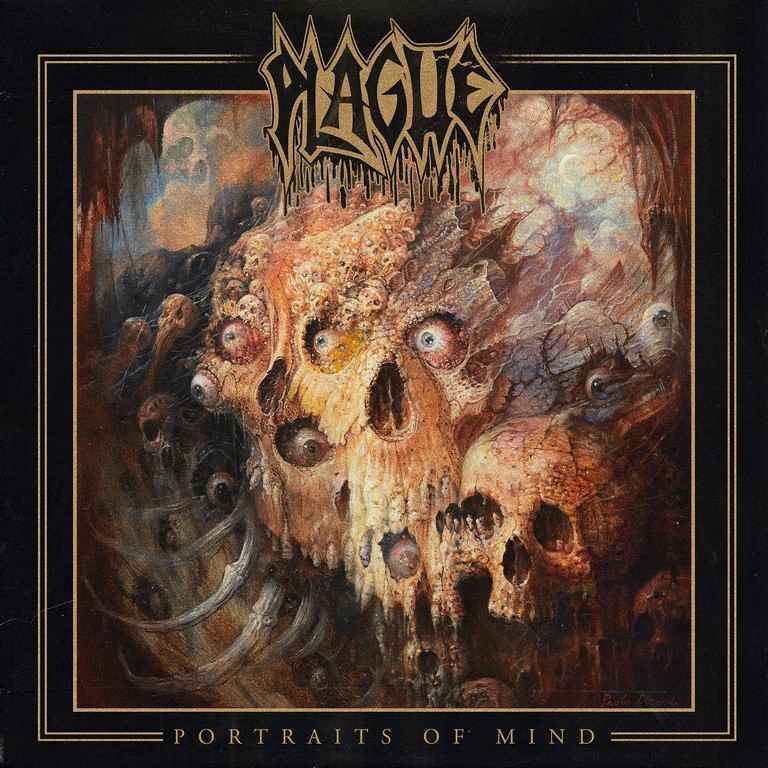 If you admire the songwriting compositions of the late great Chuck Schuldiner, technical cryptic solos of James Murphy, or variance of tempo syncopation styles of Bill Andrews, then Plague’s debut LP “Portraits of Mind” is perfect for all you OSDM lovers! It is truly the essence of early 90s Death Metal, with musical styles derived from Death, Massacre, Obituary, Brutality…you get the picture.

Plague is a four piece from Greece but sounds like they’re US Florida Death Metal scene. The macabre cover art by Paolo Girardi is gorgeous, giving off an optical illusion of skulls and eyes strategically placed to give off an illusion that its coming closer than you think, with a pile of skulls being towards the top of the image. Can’t get over it how detailed Girardi goes with his paintings, so intricate and beautiful earthy color scheme. Really fits the appeal of this album and with 7 tracks/36 minutes to captivate the listener, it’s time well invested. The production on this LP is uncanny, especially for being their first full length; guitars sounds crystal clear, along with the vocals and drums that adapt to every aspect of the song structures. Guitarist Apostolis Kiriazis doesn’t shorthand the intricate solos on this album, with every technical, at times melodic, sweep picking is reminiscent of Death’s “Spiritual Healing” and “Symbolic” era. Drummer George Karaberis has precise technique to calibrate with the shifts in tempo. My only complaint is not hearing enough of George Katsanos’s bass, with the exception of the first track “Intersperse” when you hear Katsanos come in at 0:50-0:54 amid the intro and right before Nikos Konstas’ vocals kick in. A couple of favorite tracks include “Shattering the Illusion” and “Deranged Madness.”

Portraits of Mind is an impressive album  that gives reference to the OSDM scene and is already a contender for one of the best metal albums of 2020. Whatever method these guys use to produce their music, please stick with it and give us more. (Tori Belle)