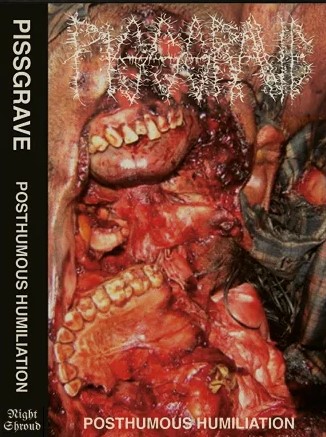 Released 4 years after their debut, Pissgrave’s second record “Posthumous Humiliation” manages to diverge from the previous work in two separate, and somehow opposite directions. While, compared to its predecessor, the production is considerably noisier delivering a raw, gritty effect on the listener’s ear; the songwriting appears somewhat more controlled, less manic, featuring slow, brooding moments like the succession set by “Funeral Inversion” and “Catacombs Of Putrid Chambers”, the latter starting off with a black metal-flavoured riff.

Aware of the fact that they could not rely anymore on the novelty factor of the total assault that characterized the previous record, Pissgrave step slightly aside from the frantic, blastbeat-driven writing style that defined their earlier work, yet proving that they had not lost their touch concerning the faster grinding kind of songs, as displayed by the title track.

The general braking of the songs led to a slighter lengthening of the duration of the whole record, which clearly tries to convey a different experience to the listener. Indeed devoid of that “Euphoria” present in the debut’s title, “Posthumous Humiliation” strives to be moody, funereal, even contemplative, just think of the melodic outro featuring an organ on the closing track, rather than senselessly violent and gratuitous. On the other hand, as anticipated, all of these factors are balanced out by the abrasive production, clearly influenced by the contemporary war metal aesthetic, characterized by uncontrollably grating guitar tones, rumbling drums and cavernous, gruesome vocals, creating a dense atmosphere for the listener to immerse into.

While at a first approach one might, even rightfully, react with a lesser enthusiasm to “Posthumous Humiliation” when put beside the utter fury of “Suicide Euphoria”, the former constitutes a perfectly legitimate move in the broader scheme of the band’s career, preventing their sound from being percepted as one-dimensional by showing some reasonable variety, rather than merely trying to replicate their debut, with the risk of releasing a sterile, uninspired work. (LucaR)