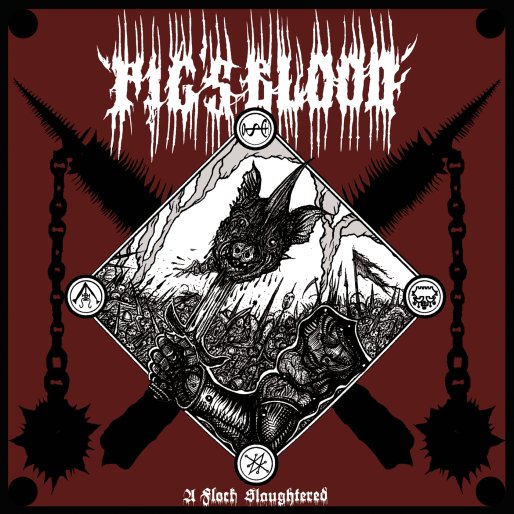 Pig’s Blood from Milwaukee, Wisconsin are an unrelenting force of Death Metal fury; the assault is perpetrated by S.M. Warstarter on bass, Chris Ellis on vocals, Brian Serzynski on drums, Bubba Nitz on guitar, and Charles Pastovic III on guitar. “A Flock Slaughtered” is their second full-length release, following a self-titled LP and a demo; the band’s sound hasn’t evolved much since the demo, but this album sounds stronger and more vicious than anything that came before. On Metal Archives, they are listed solely as Death Metal though it is fairly clear, and I’ll mention this at least two more times, there are other influences utilized as tools to craft this fine release.

With no one else credited, I’m assuming that both vocal styles are courtesy of Chris Ellis; the low hounds-of-hell bark/growl isn’t employed as often as I’d like but is devastatingly successful when it is; while the other style is a vomiting scream akin to Black Metal shrieks, but more from the gut, reminding me of a slightly less intelligible Taphos. The way the dual vocal style is occasionally used is reminiscent of Bestial Black and War Metal (the shriek being backed up by the low bark), which is driven home by the aggression and blasting the rest of the band gets up to. The guitars are a flaying and bludgeoning array of riffs courtesy Bubba Nitz and Charles Pastovic III; usually on the fast and ferocious side with a few crushing slower moments mixed in. Solos aren’t frequent, most of the songs don’t have them, but are dangerous enough when they arrive that you need the break.

The low end is helmed by S.M. Warmaster on the bass, and Brian Serzynski on the drums; though the aggression is the driving force and at the forefront, it would feel completely hollow without the drums and bass. S.M Warmaster give a fullness to the harsh music with an agile playing style that blends in at some points and stands out in others. Brian Serzynski is the drummer holding all the chaos together with the manic and destructive pounding of the skins and the crashing of the cymbals. Brian is flashy at the right times, shifts gears flawlessly, and adds immeasurable weight to the aggression; his playing becomes the meat on the bones.

There wasn’t one song on this album that I wanted to skip, or felt out of place. Even “Bloodshed Hell (Interlude)” is an enjoyable and eerie respite from the maelstrom. “Anti-kosmic Discord (Meaningless Self-Sacrifice)” was an instant favorite the second the dizzying solo popped in out of nowhere; it took at least three times repeating this track on my first play-through before I was willing to continue. I love when an album makes me stop and say, “what fucking song is this?” Every time I checked, it was this one.

“A Flock Slaughtered” is a ferocious album that has a well-earned place in any Death Metal fan’s collection. There is a replayable element to the album that kept me spinning this long past what I required to write the review. If you miss the anger in your Death Metal, grab this and their back catalog immediately. (Ethan)