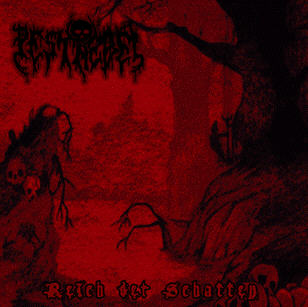 Pestnebel is one of those bands that clearly state that black metal is cult, and when a band makes statements like that, you can often say that the way it is brought matters more than the originality: regarding that, I can tell you that Pestnebel is indeed one of those acts. Main man behind the band is Tairach, who also plays in German act Fiend. For drummer Nebeltroll it was his last recording with the band, as he left the band in the summer of 2007: this release is their last recording as a duo.

Pestnebel plays ferocious, merciless German black metal: suited for those who like bands like Eternity, but also fans of Norwegian Tsjuder should keep an eye (or ear) on this one, although Tsjuder is a league higher…

The opening intro has a grim organ, but lasts too long in my opinion when taking the duration of the entire album in mind (isn’t an intro of almost three minutes a bit overdone in such matters?!?), yet after that ‘Winter of Desolation’ opens with hate and havoc: just the way I like it, and one of the songs that reminds me of Tsjuder. This line is continued on ‘Das Schwarze Grabmal’, which also has something of Marduk on their “Nightwing” album, although in this one they use the classical acoustic break as a bridge in the song. Another trick the band uses is to add some epic riffs (a bit like Immortal did in the past) to avoid it all becoming one fast blur: clearly a sign that the band knows how to write songs.

Personally I think that after a few weeks of playing the album loses a bit of its magic, generally for me the difference between a good and a magnificient album: so “Reich der Schatten” turned out to be a good album: if you love German black metal, inspired by the nineties Norwegian black metal, then this album is most certainly one that you must at least hear. Fans of true black metal somewhere in between Tsjuder, Marduk, Eternity and Endstille should most certainly check it out, for instance on their site: I think ‘Seuchengott’ is a very representative track for this album. Personal favorites furthermore are ‘Winter of Desolation’ and ‘Wenn Finsternis Auf Ewig Herrscht’: Anspieltips is the fitting German word I believe… I am very curious what the band can bring in the future with the new line-up, but in the meanwhile Pestnebel can be proud of “Reich der Schatten”: spread the disease is my suggestion! (Neithan)