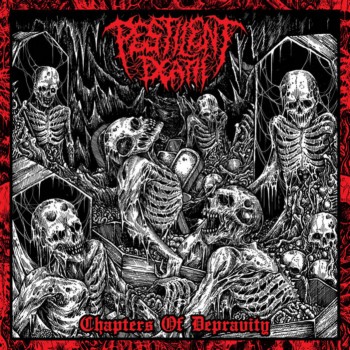 Emerging from the filth ridden depths of Los Angeles, California, Pestilent Death have been sickening the scene for nearly a decade with the their own brand of Old School Death Metal. Over the past 9 years, the four piece have evolved significantly into the repugnant entity that they are today, with several demos, EPs and an album (entitled “Eulogies of Putrefaction”) released prior to this, their sophomore full length. Influenced heavily by horror and gore, Pestilent Death follows a traditional path of the genre with an aesthetic that epitomises the bloodthirsty subject matter and imagery. Examples of this are prominently displayed in samples such as that in “Upheaval of the Undead”.

Taking pride in it’s primitive ethos, “Chapters of Depravity” is an 8 track onslaught of downtuned Undergang / Rottrevore / Incantation worship that favours a dark atmosphere over intricacy. Buried in a thick fog of distortion and complimented by a cacophony of percussive aggression, each track charges along from sludgy doom-like riffs to all out Autopsy-esque thrash passages, avoiding any instance of technicality or virtuoso lead playing. Commanded ultimately by the unholy guttural vocals of Conrado Gesualdi, the album has an interesting way of layering the instrumentation so as to provide a raw energy that sounds almost live without losing the clarity of the studio recording. The amalgamation of the bass and guitar distortions create a massive depth that encompasses the entire record, giving it a ‘cave like’ audibility (almost like Impetigo in parts).

Intense, relentless, unstoppable… Pestilent Death are a force to be reckoned with. Simplistic perhaps, but never lacking in heaviness or depth. (MD)