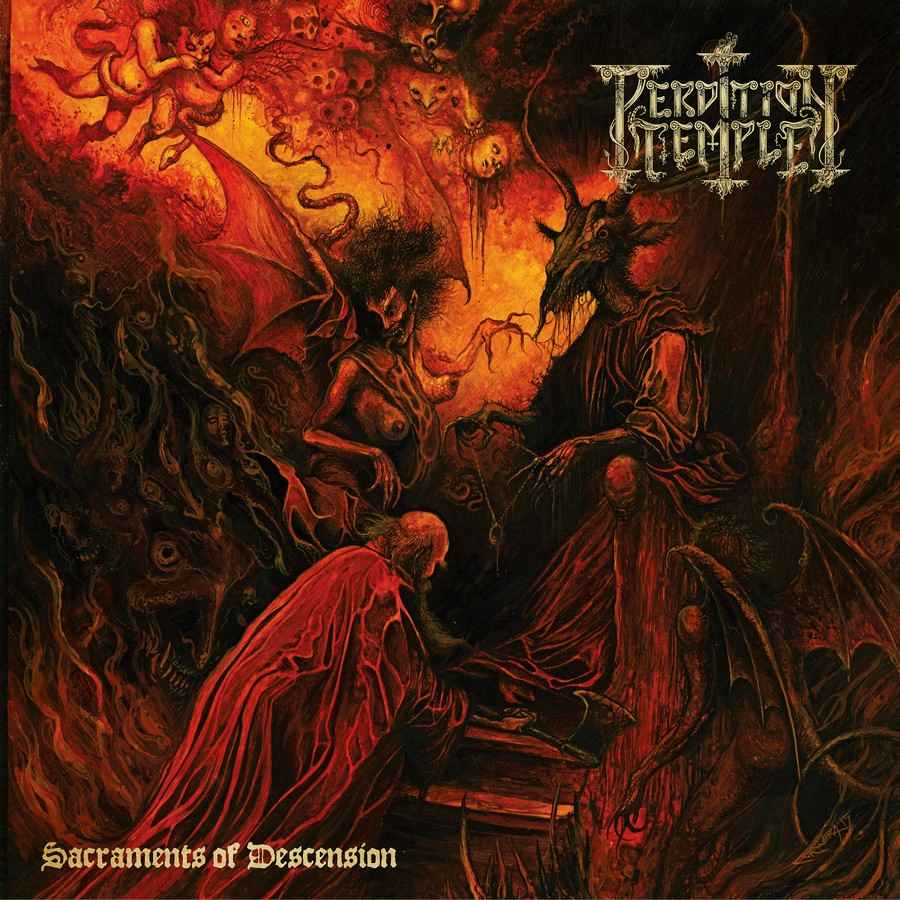 I think already a lot have been said about the genius behind the Death Metal monstrosity Perdition Temple, namely Gene Palubicki. The shredmaster and vocalist, famous for his work he did with the mighty Angelcorpse, always remained true to his relentless and chaotic Death Metal style, his own signature riffs and structures as well as leads that are all reminiscent of a certain Azagthothian way of playing. Due to Angelcorpse and its fame his other projects seem often to be buried under the radar (at least to the masses). With Blasphemic Cruelty he has a more thrashy, 80s kind of blasting chaotic entity, with Apocalypse command he went to a more downtuned way while still being “Gene” all the way and with Perdition Temple I think he has the right mixture of all his works he did and does, being probably the most complete project.

During the 11 years after its creation Perdition Temple released 2 full lengths, 1 EP and 1 split. Until now the bands work saw its climax with the release of the 2015 record “The Tempter’s Victorious”, a real banger and slayer which had all its trademarks with a killer production, nice hooks here and there and a slight change in vocals with Impurath of Black Witchery taking vocal duties.

Another 5 years (and a split in between, tribute to Blasphemy) has gone (5 years seems to be the time needed to create such monstrous sounds and it works) and Perdition Temple are back with fury and fire! “Sacrament of Descension” is just the record I was waiting for from this band. Another step further into the realms of supreme Death Metal art. The quartet shrinked to a trio, having now Alex Blume on bass and Ronnie Parmer and Gene Palubicki the remaining members from the last record. Gene also went back doing vocals and hell yes, this is his best performance so far! Powerful and aggressive to the bone. The guitars are just insane, I don’t know how he always come up with so many ideas, changes, leads, its just sick. There is so much going on. Thanks to the non stop (or almost, there is still some groove here and there as well as forward driving skank beats) pounding drums everything flows and is quite straightforward, regardless of its chaotic, technical nature the riffs got. It works already after the first listen but needs more spins to grasp every detail (as mentioned, there is a lot going on here). And as pointed earlier, what separates Perdition Temple, or better, all of Gene’s bands, he always had that old fashioned thinking in terms of songs, means, there are hooks here and there, something that the most modern stuff (which isn’t a bad thing actually) lacks or makes them less accessible (mostly I still prefer something with hooks If the songs are well written).

Another thing I want to point out is the excellent job by Jarrett Pritchard. The mixing and mastering received that finesse that was needed to make the songs shine even more. It’s a bit more aggressive overall, and it works well. Credits also to the majestic work of Daniel Corcuera aka Nekronikon who delivered a masterpiece of blasphemic art that covers the record.

Again, 5 years seem to be necessary to write and produce such craft and as long the quality is so high I wait another 5 years for the next opus to come. Strongest record of Perdition Temple and currently my favourite record for 2020. The bar has been set high folks, get ready to bang your head to death fukkin’metal! (DPF)