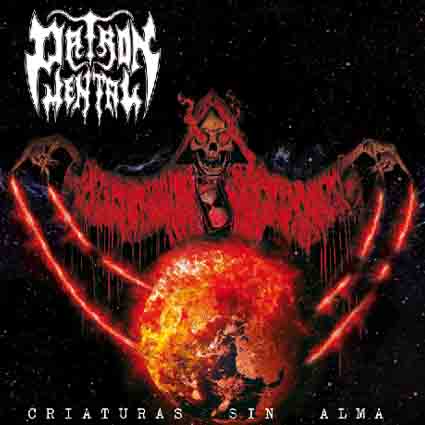 Patron Mental, out of Chili have release their first demo album titled Criaturas Sin Alma – translated: creatures without souls. A real demo cause when listening to this disc it sounds very messy and unstable. But every band has to start somewhere, and these Chilean Thrash/Death metal band took their first step into the big world of metal. First thing that won’t help them I’m afraid is the fact that the lyrics are in their native language, meaning Spanish…not exactly good if you want to be heard abroad. Perfect if you want to stay local, but I don’t think it’s their ambition to only play at their hometown. Five tracks are on this demo and after several listening sessions I must admit that the demo-vibe fades away  the more you listen to it, cause there are some nice musical parts to discover on this one. Take for example track ‘Sedientos de sangre’ where you’ll hear a nice midtempo part with nice drumriffs that end the song, or for example the more black metal vocals in tracks ‘Instinto asesino and ‘Inquisición’. So to conclude: these guys still have mountain to climb and a sea to beat, but in the end there is some nice music hidden behind the messy demo production. Mediocre if I have to give it a name. (Fredde)