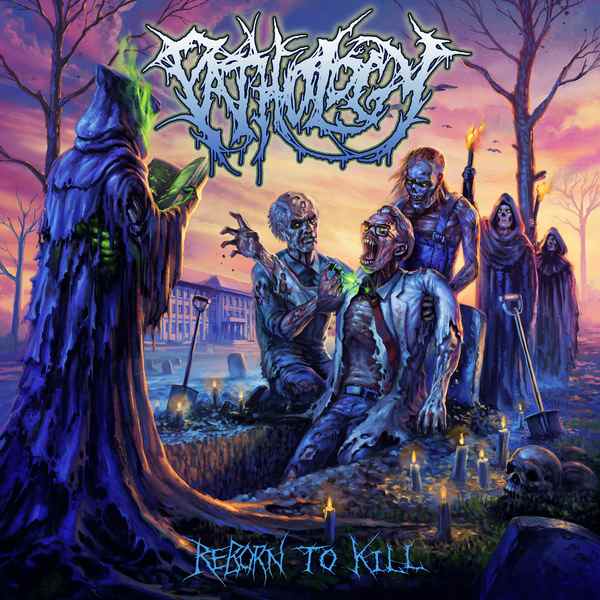 Based out of San Diego, California, Pathology has been around since 2006, releasing two singles, part of eight compilation albums, and released their TENTH LP “Reborn To Kill” in 2019, something I find rare since bands like to throw in a lot of EPs and an occasional LP in between, but not these guys. Lineup changes over the years have varied, leaving  drummer Dave Astor to be the remaining original member and features Ricky Johnson on bass, Dan Richardson on guitars, and Obie Flett taking over vocal duties. Cover art done by Swedish artist Pär Olofsson who’s also created the last eight Pathology full lengths and every cover depicts an apocalyptic/zombie styled cover, and with “Reborn to Kill” cover depicting a sky at dusk hours, with a scientist(reminds me of the Dr. from Re-Animator) being resurrected by robed figures, being held by zombie corpses and candles surrounding his gravesite.

Their lyrical content over the years has shifted from gore/death to more  conspiracy/ inhumane society topics, and persistent to keep their sound still brutal, regardless of lineup changes. Their song structures are still solid, with polished production to match and has never fallen short on any Pathology album, “Reborn To Kill” is no exception. With twelve tracks clocking in just over 33 minutes, you will appreciate the 3/4 new lineup on this album that deserves recognition. I enjoy the first couple of tracks but really think it picks up on “The Beast Within”, showing off Astor’s amazing drumming technique, blended with Richardson’s guitar, especially the quick melodic/solo between (0:52-1:08) and Flett’s chunky deep growls delivering relatable lyrics

“Life is now cheaper than the dirt we pile the bodies on
Humanity’s disassociated with what once made us feel….Alive
Societal disintegration, forgotten empathy
A cancerous growth of inhumanity”

“Empathy Ends”  is a beautiful melodic 1:48 instrumental, leading into aggressive, brutal track “Dragged Into The Cave” discussing a barbaric monster filling his needs, really dig the break down starting at the 1:06 mark, followed by a sweet guitar riff at 1:20. One of the longer tracks “The Druids Gavel” starts off a bit slower with a nice 0:34 opening, Flett’s growls seeping into the track after and a heavy slamming riff giving contrast to previous fast paced tempos on this album. I always appreciate when bands have confidence to play up their sound, keeping elements of brutal but tastefully alter the tempo and keep significance  to their name instead of changing entire sound completely for a whole album. Gives a nice change of pace. All in all, really enjoyed this album with the newest lineup. They’ll continue to deliver brutal, gut wrenching, headbanging goodness for more years to come. (Tori Belle)