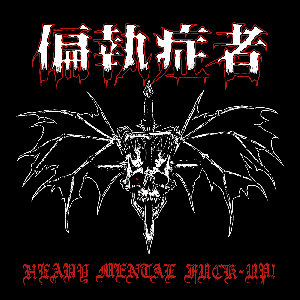 A threesome from Sweden with an oriental name…why would you do that? And after listening to this second full-length album I know what reason it perhaps could be. According to me it’s just because their sound is special in its own way…a blend of d-beat (the main ingredient), rawpunk, black metal, hardcore, speed metal and rock ‘n roll, but executed in a very energetic manner. But I have to warn you, cause I don’t think that a normal metal fan will embrace this album. Therefore there’s too many sizzle going on at “Heavy Mental Fuck-Up”. The production is very neat and the guitar-and bass riffs are fast and get a great backing from the drums, accompanied with aggressive vocals, but in it’s general this is too much to swallow with the different styles involved in this album for me personally. Also all tracks have oriental names but after several listening sessions, I can answer affirmative: English. As said: very special. (Fredde)