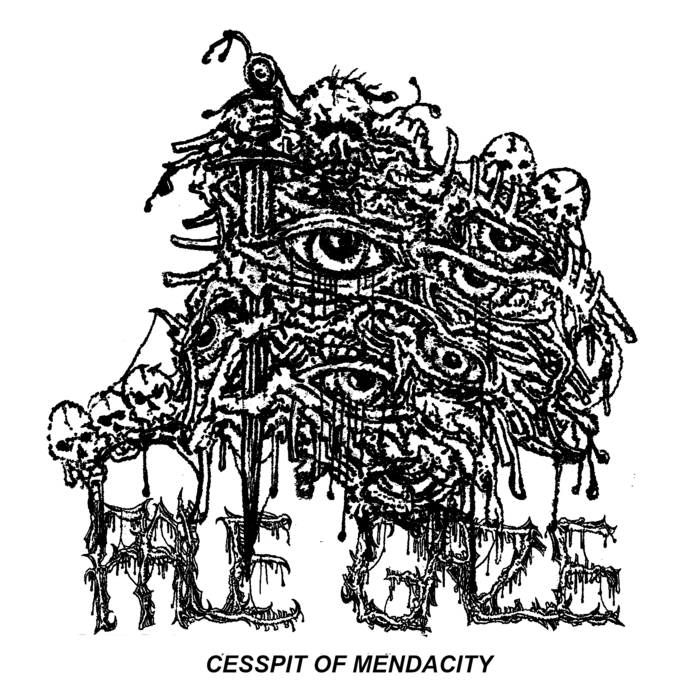 Real talk, Cody Davidson of Fix My Face Records IS the modern day Scott Burns for the underground & any release he masters is pure gold. No exception when it comes to CT solo act Pale Gaze, debut “Cesspit of Mendacity”, translates to “sewage of lies”. Originally supposed to be a four track EP, but opted to work diligently producing a nine track full length, over thirty minutes of unrelenting decadence.

Cover by Ireland based illustrator Droll Meadow, who’s done cover art for Cave Grave, Bacterium, & Towergeist. Childish observation, but reminds me of “The Appetizer” off Spongebob Squarepants episode called “Squilium Returns”, a shapeless blob embedded with eyes and skulls, even a sword which you would think it perforate those eyeballs & break free.

A personal favorite is “Spineless Coward”, for all you feeble wimps out there, the structure is slow tempo, adorned with ethereal notes of keyboard leaving you hooked then abrupt spew of gutturals near outro to bring you back to reality. Leaving the longest for last, “Beyond The Portcullis”, there’s a playup with different genres that come off contemporary over OSDM which is refreshing, drum work is insanely aggressive, ferocious roaring wails ⅓ way in, moment of lucency, cadence descending deeper, drifting into dismal ambience before the great transformation. (Tori Belle)