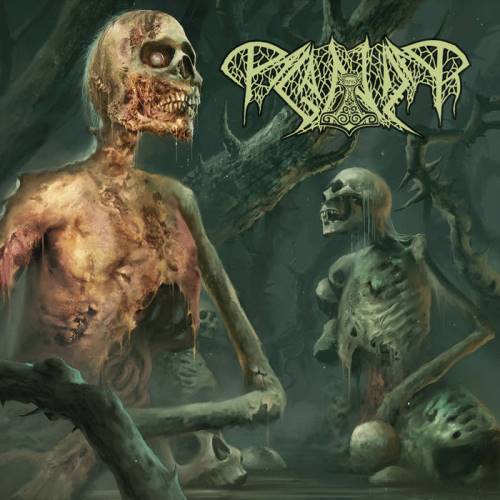 Hailing from the depths of Sweden are Paganizer . A band that surely does not need any introduction (in my opinion that is of corpse). This band has been active since 1998 under the name Paganizer and from 1994 till 1997 under the name Terminal Grip. Paganizer is one the many death metal bands of Rogga Johansson (who has a very long list of bands that he plays/played in, here are a few he plays in: Dead Sun, Down Among the Dead Men, Echelon, Eye of Purgatory, Humanity Delete, Johansson & Speckmann, Lobotomy Dept., Megascavenger, Minotaur Head, Necrogod, Putrevore, Revolting, Ribspreader, Rogga Johansson, Severed Limbs, Stass, The Grotesquery, Those Who Bring the Torture). With Paganizer, who is one of his main band I guess, he (they) released 10 full-lengths and 6 EP and many splits and compilation albums. So this band knows exactly what they do and do that really well. One of my favorite albums of them is “No Divine Rapture” (2004). “Land of Weeping Souls” is their 10th masterpiece. And I must say that I am surprised about it. Was expecting more brutality but got more old school to the bone death metal. Which is something that I personally get very happy about. 10 tracks of pounding and grooving riffs that remind me of Grave combined with some Unleashed and they are not afraid to fill it with solos, which are well done!! The drums are straight in your face pounding up and blasts beats that also contain a hell of groove in it. The bass does its job well and give it a heavy undertone. Then the thing that appeals the most on me are the vocals. Deep grunts that sound like they are pulled from the gutter like old Hypocrisy /Authorize. There is not one song on this album that I do not like. All the songs are filled with variety and the composing is excellent. Killer production and excellent grooves. If you are into bands like Dismember , Hypocrisy , Brutality , Benediction, Entombed , Entrails etcetera (could continue this all day haha). Then this album is a must have for you collection! (William)