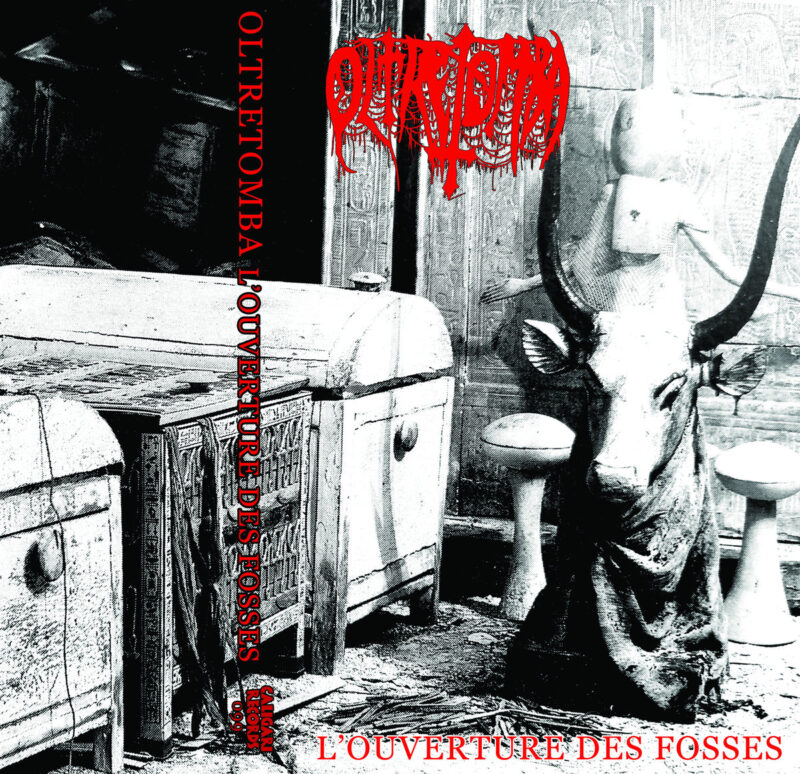 Oltretomba are a ritualistic Black/Doom project featuring members of Mok Nok and Angkor Wrack. Protagonist in this project is Zven Balslev, who also operates under the moniker of Heksehyl.

He’s not only a gifted musician but an conceptional artist as well, releasing several art zines and avantgarde records through his own Cultpump and Smittekilde Records labels. And although he is from Copenhagen, Denmark, he currently resides in Marseille, France.

“L’ouverture des Fosses” ( ‘the opening of the pits’ ) is the second full length album and a follow up to the “Zenker” album MC. This second album is released by Caligari Records in a limited edition and is available on digital format as well. Executioners on this release are Machoire (Drums), Grand Duc (Organ), Lord Fungus (Vocals, Bass, Guitars) and who knows which other musicians contributed their folly to this recording.

What does Oltretomba offer us? Imagine a festering hybrid of martial occult Black/Doom with crusty distorted guitars, sombre, raw necrotic dictatorial vocals, an extensive well-crafted soundscape of disturbing dark abrasive sounds in the far background and heavy ritualistic hammered drums that sound like the pace galley slaves had to row to. The 5 ( lengthy ) songs on this release emanate a cold, harsh, industrial feeling and a very dark creepy occult atmosphere. Vocals are in French, but also Latin and Italian phrases can be heard, as is the case on the haunting ambient third track “Le texte des Pyramides”.

It is an acquired taste – industrial laced dystopian Black/Doom with all the trimmings. Musically, it evokes the musical antics of Skin Chamber, N.V.K.D., Puissance, Aborym, even the misanthropic antics of Akitsa from Canada and especially Sektemtum from France … nonetheless – these sonic disruptions stay firmly rooted into occult Black Metal and Doom.

I like it. It’s filthy, gritty, lewd and creepy enough for my distorted taste. Furthermore – its grim and coherent total sound and production are more than adequate to keep this album entertaining and going until the end. And far less annoying than the current harsh power electronics hype. At least, these 5 Oltretomba tracks are real songs and not some barrage of electronic noise. A daring and well-applauded move from Caligari Records, if you ask me. This is a nightmarish soundtrack for a world, going down the drain.