Officium Triste – The Death of Gaia 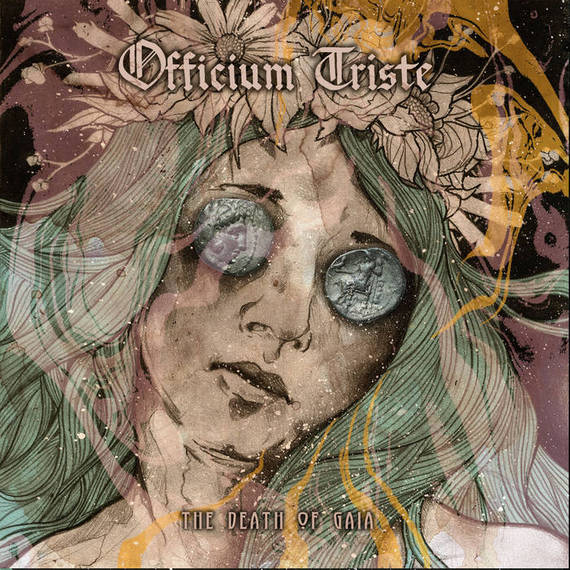 On the year of their 25th Anniversary, Netherlands based Officium Triste have decided to prove exactly why they are still in this business, with what to me is one of the finest albums released this year, in a year where both Doom and Death bands and any combination of the two has already been absolutely spectacular. Yes folks, as unbelievable as it may be, The Great Mackintosh is going to be mostly serious for once. This may never happen again, but such is the importance of this release, that I have little choice even though it goes against my very nature as a babbling idiot.

“The Death of Gaia”, a heavy enough title in itself, could well be referring to the death of Mother Earth, something that some of us may believe is well nigh inevitable now, Gaia being the Greek mythological title for the creator of all things natural.The mother of all life, she who gave birth to the Titans, who then went on to birth the Olympian Gods,etc. All easily accessible information for those who look. I’m hoping it isn’t about one of their cats or something, because then I am going to look proper stupid, but an apt title it is indeed for an album of such magnitude. What you get here is nothing short of stupendous, and I can throw in many more words that will barely scratch the surface. Reviewing something like this is no easy task, and I wish I was one hell of a lot more competent than I could ever be to get this right and do it justice, but it is what it is, and these are my thoughts. I will leave out references to their early work as well, or this is going to end up being a novel. Suffice it to say that this is most certainly an Officium Triste album, they have not decided to do anything else than what they are best known for, and this in itself is a good thing, because they were already going along just fine and dandy thank you very much. Well okay, it most certainly stands out way above the pack, and one or two of their earlier ones, but at its core, this is them, and why their fans love them. Not heard of them? Read on,that is all I can suggest.

Doom/Death this is indeed, and from the opening track,“The End is Nigh”, such majestic heights are achieved that one can only weep and clutch at ones hanky, tissue, or other face wiping implement like a child with a safety blanket. The end could very well be near, after all isn’t it inevitable that all things eventually fade away, that love is lost and good times fade into the distance as we face our own mortality, and what if that mortality referred to the end of not just you and yours, but ALL, and everything we have ever held dear. As doomy as that sounds, Officium Triste still manage to bring a sense of wonder and joy along with the misery. As uplifting as it is morose, like staring in wonder as the Valkyrie ascend to the heavens with your fellow warrior after his demise, this is simply such a mix of feelings that it evokes great leaps of the imagination if you are so inclined. To some it may just sound like sheer misery, but to those in tune this is the stuff of legend.

“World in Flames” brings much more to the table, so much more, each song being a chapter in a forlorn tale of loss, of woe, as we stand back and watch our mother burn to nothing but ash. Beautiful passages of clean guitar lines running alongside such melody that your eyes will leak, your skin will form what we know as goosebumps, and the lump in your throat will only increase by the second. The heavier guitar parts are never overdone, and prove a wonderful juxtaposition to the feeling of unsettling serenity, and along with vocalist Pim Blankenstein’s vocal delivery remind us that first and foremost, Officium Triste ARE without any shadow of a doubt as heavy as an engine block dripped in concrete, coated in lead, and tied to several elephants that no doubt at all have planets in their pockets. Whoops, there I go, the imagination soars, and for that I am not at all sorry.

“Shackles” will remind you of their roots, way back in the day when bands like Paradise Lost, My Dying Bride, Anathema, and Katatonia where making their biggest and boldest statements. Sure a few of them have had their ups and downs, and just like our subject here have powered on, and of late seem to be hitting their straps well and truly again. “A House in a Field in the Eye of the Storm” is a short piece, but way more powerful than many another band could achieve given twenty minutes to show their mettle. A combination of soaring yet mellow lead guitar, combined with piano and other acoustic brilliance, an almost soothing rhythm guitar counterpoint, and a spoken word section that I can simply not go past without listening to it’s wonder at least more than twice. I kid you not, this is as good as it gets.

We are then treated to “The Guilt”, an emotion most civilized human beings are capable of feeling, and a song that is capable of taking you back to when you have felt it more profoundly than ever. The interplay between the female vocals and Pim’s heartfelt apologetic explanation of failure is heartbreaking stuff. Is he speaking for all of mankind and how we have slowly let our mother die, or is he speaking of some past love that he let go, I for one do not know, but the feeling of loss, his acceptance of his (or our) transgressions is eminently powerful, and lain out right before us all to dissect at the time of our choosing. More tissues please, and I say that with the utmost respect, as this one will hit home for many of you as it has me.

Track six, “Just Smoke and MIrrors” runs with a theme of reassurance. “There is nothing that can hurt you”,  “Hold back your tears, you’ve got to stay strong”, “It’s just smoke and mirrors, illusions to trick your mind”, and so on are lyrical lines that are as comforting as any could possibly be on a release of this kind, and the accompanying musical passages are nothing short of what we have come to expect on this one, both uplifting and melancholic in turns. Please forgive me for not sharing the names of the contributing artists on some of these songs, as I am not entirely sure of exactly which part they have played, but rest assured they have only made the magnificent, even more so, and I take my proverbial hat off to them all, and bow graciously in both appreciation and awe.

Onto track seven, “Like a Flower in the Desert”, which for me brings me right back to the other bands I have previously mentioned, more none so other than Paradise Lost, and let’s face it if you read my waffle at all you know the pedestal I put them on. More modern bands like Ireland’s The Crawling and even the latest from Finland’s Rottendawn, not to mention the excellence of American band Pulchre Morte have only reinforced the fact that this is the kind of sound I could listen to every bloody day for the rest of my life if I was stuck on that shitty island in the middle of nowhere that people keep asking you about, Yep, this has got it all. The tone, the song structure, and that ability to be infinitely replayable for the sheer fact that it plays my heartstrings like they play their respective roles on this album, sublimely, flawlessly, and with nothing but utter integrity. This is about as fast paced as this album goes, and chugs along at an almost cracking pace compared to the rest, but yet again, nothing out of place, nothing that does not suit the feel or the mood, just everything laid out perfectly to the vision and the idea that Officium Triste had when writing.

We began with the first track, “The End is Nigh”, and now it truly is. No, don’t run away screaming thinking that Judgement Day has arrived or that some idiot politician has an arsenal of nukes aimed directly at your mailbox, I mean the end of this album, and if you by now have heard it, and get where I have been coming from, you too will feel a sense of keen loss. “Losing Ground” takes us out, and what a way to exit this is. Sure, lyrically the subject matter may dwell upon matter that may not want to make you go and want to skip down the road handing out flowers to passers by, but it still has that quality that inspires, that feels like even though the world may be a shitty place, we are blessed to have such talent walk amongst us. Sure, we all may perish one day, either together or alone, but whilst we have this kind of excellence to listen to, our load is made immeasurably lighter by bands of this calibre being so damn good at what they do.

25 years hey? A mere blink in the eye of a god like Gaia, a mere nothing to Mother Earth, but a damn fine achievement for a band that once considered pulling the plug on their career. I cannot thank them enough for being steadfast enough to continue, and kudos to Transcending Obscurity Records for putting them alongside their already stellar lineup.

You simply must have this, and if I have over enthused, then so be it. I will wear the criticism as a badge of honour, because at the very least I have made you listen to it, think about it, and pay attention to a band that should have had far more attention for an eternity. (The Great Mackintosh)